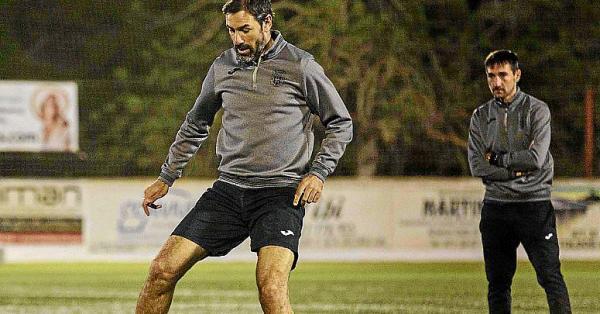 Robert Pirès, world champion with the French national team in 1998, enters the Municipal de Santa Eulària every afternoon, goes down to the changing rooms, dons the coaching staff’s kit and goes out onto the pitch with the team. This routine has been repeated since October, shortly after the former professional footballer moved to Ibiza with his family and decided to get involved with the club.
Pirès, known above all for his career at Arsenal (2000), Villarreal (2006) and in the French team that was world champion in 1998 and the Eurocup in 2000, has joined the Peña coaching staff, among other things , as a rehabilitation worker, working with injured players until they can rejoin the team, a job he was doing at Arsenal until shortly before moving to Ibiza in August of last year with his family.

The relationship between Pirès and the Peña Deportiva began last summer, when the Frenchman’s two sons, Alessio, 9, and Theo, 13, joined the club’s base to play football. «My wife, my three children and I decided in August to leave London and move to Ibiza because Brexit and the COVID changed life in England a lot. We rented a house in Santa Eulària and we have all adapted very well to the island », explained the Frenchman.
It was an afternoon in September, as the first team stretched out on the pitch, when Raúl Gómez thought he saw one of his soccer idols, Robert Pirès, in the distance. «I followed him since he played for Olympique de Marseille and when he signed for Arsenal I became a fan of the English team. Then we agreed at Villarreal, I in the subsidiary and he in the first team, but we had never spoken. And suddenly I see him at La Peña. At first I doubted it was him, but I yelled at him: ‘Robert.’ Spun around. We started talking and he told me that he would love to get involved in the club, so I introduced him to Raúl Casañ, “said Gómez.

READ  Aldosivi was forceful against Arsenal and achieved his pr ...

The Arsenal player, who loves to get into the team’s training rounds, explained that his role in the team is “to help in whatever they ask of me.” Sometimes players ask him technical questions, and sometimes more personal ones. “Sometimes they have asked me how they can handle the pressure they have because they score few goals or what it feels like to win a World Cup and the European Championship” revealed the Frenchman.