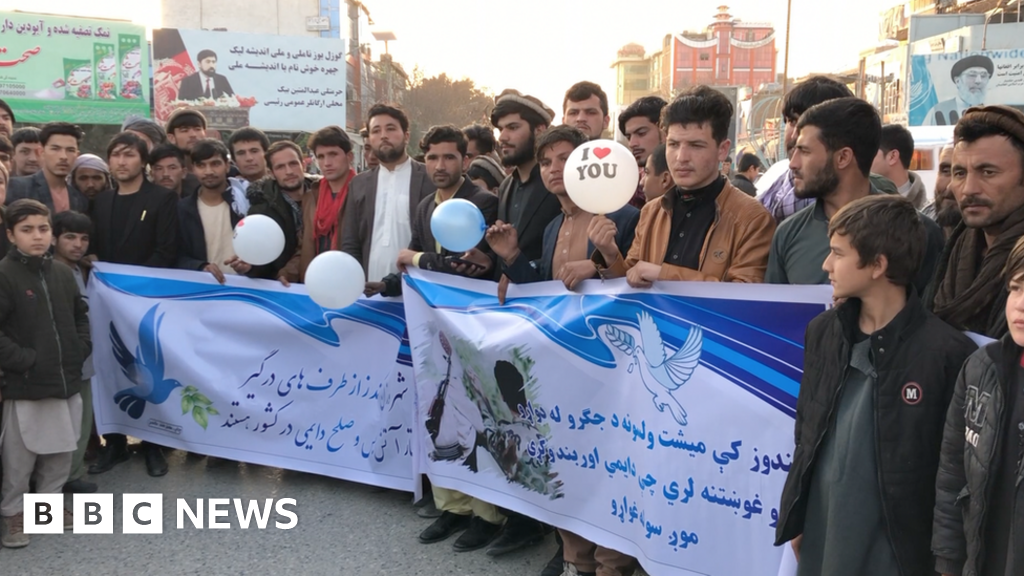 An Afghan flag flies over the busy roundabout that marks the center of the city of Kunduz. Pointing to him, a policeman standing guard tells me that whenever the Taliban briefly captured the city, one of their first actions was to replace the flag with their black and white banner. They have done this twice in the past five years.

Behind us, in a corner of the square, a poster shows photos of senior police officers killed here in a suicide attack during another insurgent assault last August.

For now, however, the rotunda hosts a small demonstration in support of the peace of around 100 young people. Patriotic songs pop out of a speaker: someone in the crowd is holding a large bunch of balloons with the words “I love you”.

“We have come to support peace,” says Zahid, one of the protesters. “I am so happy. In recent days he has been calm in Kunduz and across the country. We want a ceasefire that lasts forever.”

A week-long “reduction in violence” is about to end in Afghanistan after the Taliban, the Afghan army and US-led international forces have agreed not to launch attacks on them for seven days.

The period has passed largely successfully and the US and Taliban seem ready to sign an agreement on Saturday in Qatar. It will establish a timetable for the withdrawal of American troops in exchange for guarantees from the Taliban to prevent groups like Al Qaeda from operating on their territory.

It is a key development in the peace process, aimed at ending the longest war ever in America, and has raised hopes for a war-tired Afghan population.

Rural areas on the outskirts of Kunduz have witnessed fierce fighting. We travel to the village of Taluka, recently captured again by the government after being in the hands of the Taliban for the past three years.

The local school was canceled by an airstrike, targeted by the militants who used it as a base.

Nasirullah, an elderly man who lives next door, also saw part of his property destroyed.

“Four Taliban fighters climbed over the wall to hide,” he says, “I told them, ‘go away or the house will be hit in an airstrike’, but they refused.”

Everyone in the village wants to show us the devastation in their homes. Many of the residents have yet to return. The Afghan army has helped clear anti-personnel mines, but some still remain.

Another elderly resident points to a huge dent in a wall of his home caused by a mortar bullet.

“I was sitting there with my wife. She was hurt here,” he says, grabbing his neck. “Another rocket landed over there. I don’t have the money to rebuild all this.”

However, he is confident. “I have a TV and follow the news,” he says. “Whenever I feel there will be peace, my heart fills with joy.”

The US-Taliban agreement is a step towards peace, but a complete ceasefire, together with the country’s political future, is something that will have to be established in separate discussions between the Taliban and other Afghan leaders. Those talks will follow the signing in Qatar and could last for months, if not longer.

In addition to the complication there is an ongoing dispute over the results of the presidential election. Ashraf Ghani was declared the winner, but his main rival, Abdullah Abdullah, denounced a fraud and threatened to form his own parallel government.

It has not been made public whether the “reduction of violence” will continue during the “intra-Afghan” talks as they are known. At an army checkpoint at the eastern entrance to the city of Kunduz, soldiers check for Taliban infiltrators, worried that they can use the partial ceasefire to smuggle explosives inside.

Salahuddin Safai, 32, lives nearby with his extended family. On average, he says, the Taliban attack the checkpoint at least every fifteen days, advancing from the fields just beyond his home.

Safai claims that his children have become accustomed to the sounds of gunfire, but is concerned about the effect on their mental health.

He hopes for peace, but at the same time cautious. The family has already seen false dawns. After the United States overthrew the Taliban in 2001, they returned to Afghanistan from neighboring Pakistan, where they lived in a refugee camp, thinking that the country would thrive. Instead, they found themselves caught along the fluid lines of a war in which tens of thousands of Afghans died.

“If we look at our past, similar things have happened,” he says. “When the Soviet Union withdrew from Afghanistan, there were peace negotiations, but they failed. A civil war began and the country became what it is now.”

It refers to what many see as one of the worst episodes in the history of Afghanistan, when rival “mujahideen” groups that had successfully fought against the Soviet invasion, fought both against the local Afghan communist government and each other in a brutal one. search for power.

“We are a little skeptical about this process but, God willing, history will not repeat itself,” Safai tells me.

There are also concerns about the price that Afghans may have to pay for peace. If the Taliban accept the country’s current democratic system and women’s advances in the past two decades.

The group insisted that women should be allowed to study and work, but local residents tell us that in some villages near Kunduz under Taliban control, girls are prevented from attending school once they become teenagers.

For others, however, the priority is the end of violence. Ghayasuddin, in his 70s, from the village of Taluka, lost both legs when he stepped on a mine laid by the Taliban.

Could you ever forgive them, I ask?

“If they become our neighbors, I will have to accept them,” he replies. “All I have is in this village, there is no choice but to learn to live with them.”