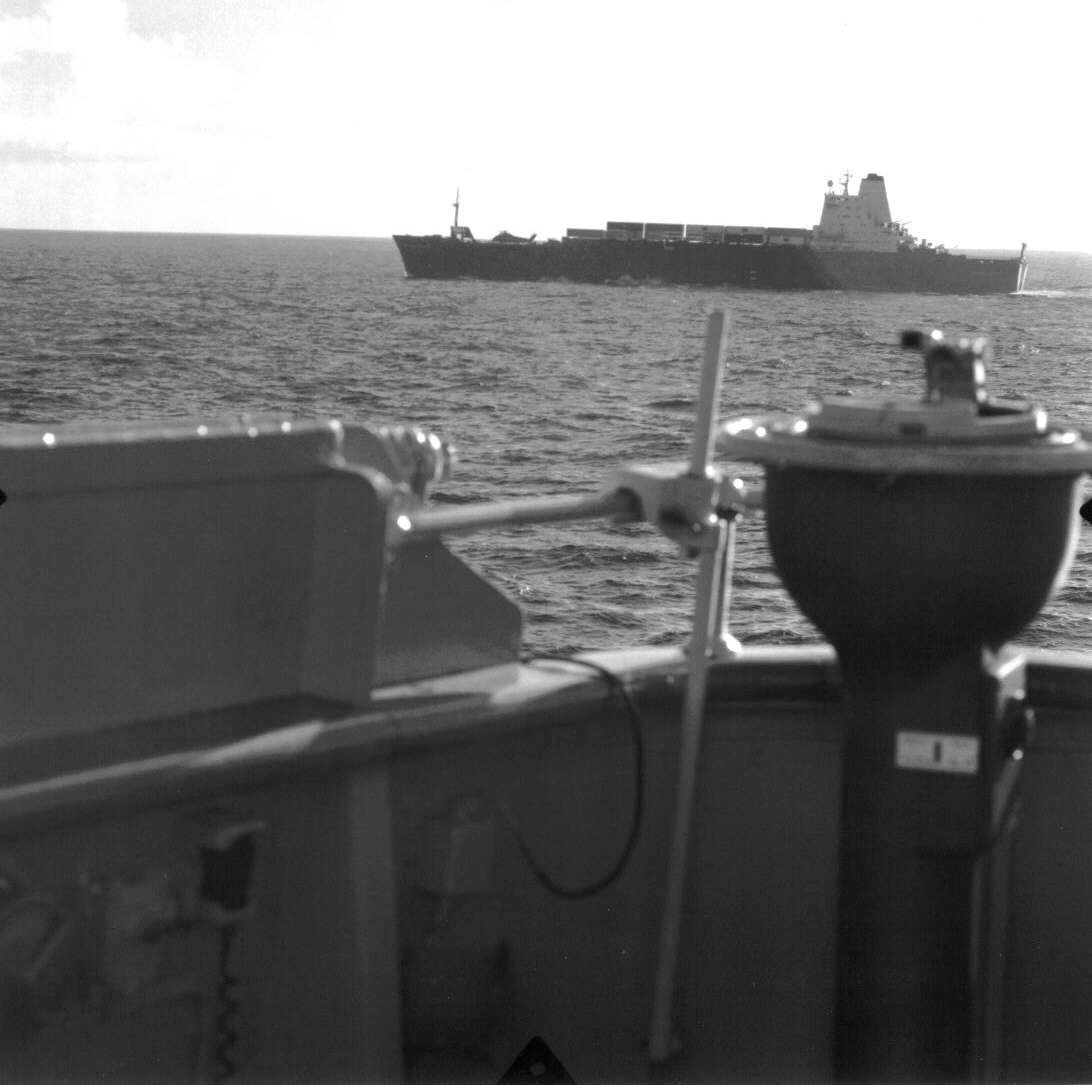 The Atlantic Causeway was a British ConRo freighter built in 1969, which initially operated in transatlantic service and was requisitioned by the Royal Navy for the Falklands War in 1982. After it was returned, it was launched and scrapped in 1986.

At the end of the 1960s, the consortium members of Atlantic Container Lines (ACL) ordered six ships of the ACL G2 series for liner service, of which the Cunard Line took over two units. She ordered both from the Swan Hunter shipyard, which laid the first newbuilding on the Walker Naval Yard under hull number 1 on keel. The launch of the Atlantic Causeway took place on April 2, 1969, the delivery took place at the end of the year.[1]

Her length was 212.1 meters, she was 28.0 meters wide, had a draft of 9.1 meters and measured 14,946 GRT or 7405 NRT with a deadweight of 18,146 tons. The ship could load around 1200 standard containers (TEU). The drive consisted of four steam turbines from the manufacturer Associated Electrical Industries from Manchester. They achieved 38,500 hp and worked on two screws. With that she reached a speed of 23.0 knots. She had a bow thruster for berthing and casting off maneuvers. The crew consisted of 33 men.[1]

After delivery in November 1969, the ACL shipping consortium continued the Atlantic Causeway in the transatlantic service between Europe and the North American east coast, without any particular abnormalities being passed down from the next few years.[2]

At the beginning of the Falklands War in 1982 the Atlantic Causeway as well as the sister ship Atlantic Conveyor one of the 40 British flag civilian merchant ships requisitioned by the British Ministry of Defense and used to transport the British Task Force to the Falkland Islands. Two days after the requisition, the conversion of the ship began in Devonport on May 6, 1982, in order to initially use it for helicopter transport and on site as a helicopter carrier. In contrast to the Atlantic Conveyor got the Atlantic Causeway an improvised hangar deck and refueling facilities on the forecastle.[3]

On May 14, 1982 the ship left England for the South Atlantic with eight Sea King HAS.2 and 20 Wessex HU.5 helicopters on board and reached the exclusion zone around the Falklands on May 27. Four days later, on May 31, she unloaded helicopters and supplies in the landing zone off San Carlos.[4] During the next few weeks, the served Atlantic Causeway The helicopter as the base ship: In the course of the operation, around 4,000 helicopter landings and around 500 refueling took place on the ship.[3]

In July 1982 the Atlantic Causeway back to the UK[5] and carried two of the five captured Argentine ground attack aircraft of the type FMA IA 58 Pucará as deck cargo.[6] After the dismantling, the Atlantic Container Line her ship back. The shipping company then hung up the freighter in Liverpool. In 1986 the ship was finally decommissioned and sold for scrapping. It was given the transfer name for the trip to the scrapping yard in Kaohsiung / Taiwan Atlantic and was canceled from August 16, 1986.[1]