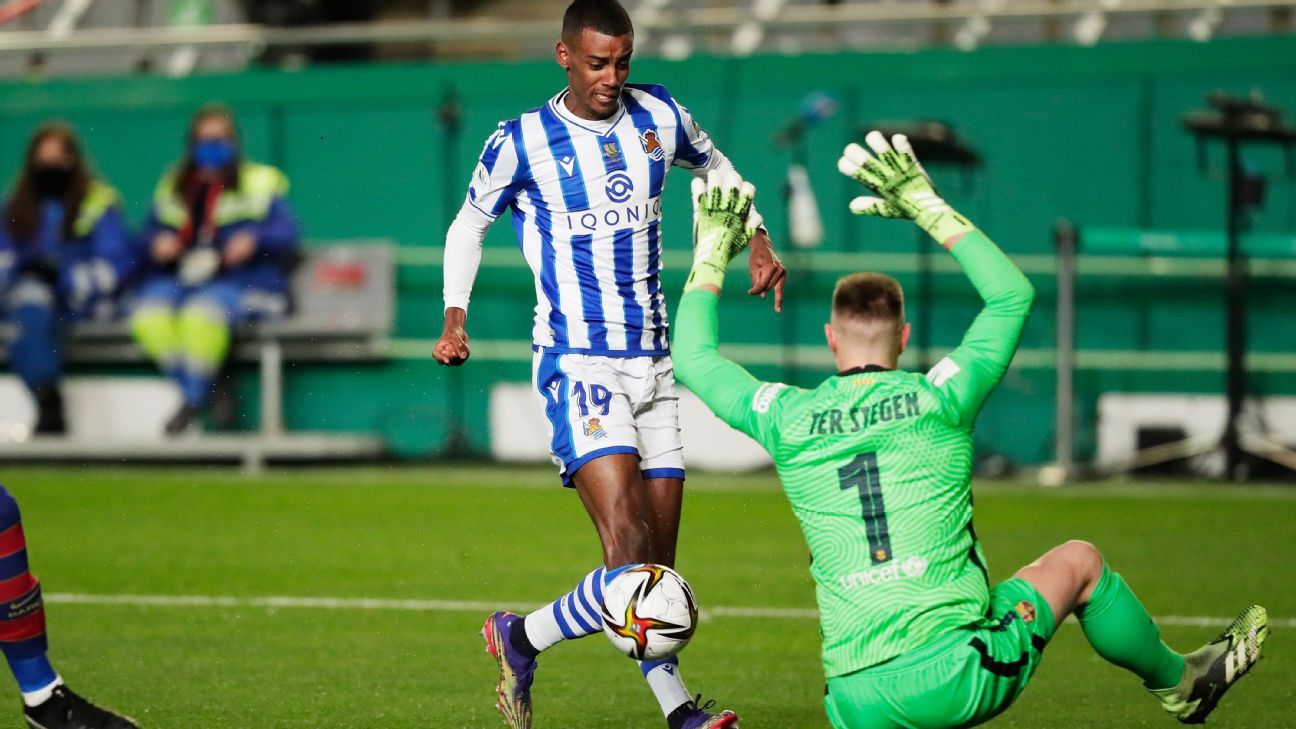 BARCELONA – The sports management of Barcelona has intensified its monitoring of Alexander Isak because they are aware that one of the priorities of the future president of the club will be the signing of a center forward, different sources revealed to ESPN.

The current board of directors does not have the power to sign, but the current sports management led by Ramón Planes has continued to comb the market in recent months to offer the new president different reports on the positions to be reinforced and on some players who would consider interesting to do so.

In this sense, the Barça club scouts have been analyzing Isak’s performance at Real Sociedad since last October.

Isak scored 16 goals in his first year with the Basque team (9 in La Liga and 7 in the Copa del Rey) and this season he is on the way to improving that record after scoring 12 goals in 20 La Liga games.

The Swedish international had an irregular start to the season but has scored nine goals in the last six games and last weekend he scored a hat trick against Alavés.

The 21-year-old attacker is not the only striker followed by Barcelona scouts, but the reports are positive due to his youth, his experience in La Liga and because they consider that the similarity of styles between Real Sociedad and the culé team would facilitate their adaptation to the Camp Nou.

READ  A Barcelona beyond the influence of Lionel Messi

However, Barcelona are also aware that Borussia Dortmund could complicate the operation, since the Germans saved a 30 million euro buyback option when they sold the forward to Real Sociedad in 2019 and that expires next summer .

Barcelona are also following another 21-year-old nine such as Benfica’s Darwin Núñez.

The Catalan club already tested the signing of the Uruguayan when he was playing for Almería, but his season in Portugal is not being as promising as expected and he has only scored 4 goals in 19 league games (12 goals in all competitions).

Barcelona are looking for market opportunities like Isak and Darwin because they are aware that it will be very difficult to compete with the greats of Europe for Erling Haaland and Kylian Mbappe due to their precarious financial situation.

Mbappe is the forbidden dream of the Barça presidential candidates while Haaland has been followed since his days at Red Bull Leipzig. In this sense, Toni Freixa, one of the three candidates for president of Barcelona, ​​has ensured that he is ready to receive a capital injection of 250 million and that buying Häland and Mbappe “would be possible”.

“We have closed an agreement of intentions with an investor who will contribute 250 million euros for ‘Barça Corporate’ and as a consequence we will have the necessary funds to substantially improve the financial situation and for the 2020-21 season, Barça will incorporate three differential cracks, two in attacking positions and a defense, which will allow us to compete at the highest level again ”, said Freixa.

READ  Barcelona, ​​without Messi, lengthens its perfect step in the Champions League

For his part, Joan Laporta, has not commented on the matter at the moment but it is well known that he maintains a great relationship with Mino Raiola, representative of Haaland.

In the same way, two other names that are also on the Barcelona list awaiting what the future president decides are two forwards who would arrive at zero cost such as Sergio Agüero and Memphis Depay.

The Argentine has only played six games this season due to injuries and the coronavirus but ends his contract with Manchester City on June 30 and, at 32, could still have a season or two in the elite.

For his part, Depay, who also ends his relationship with Lyon at the end of the season, is a request from Ronald Koeman, so his possible incorporation would largely depend on the continuity or not of the Dutch coach at Camp Nou.