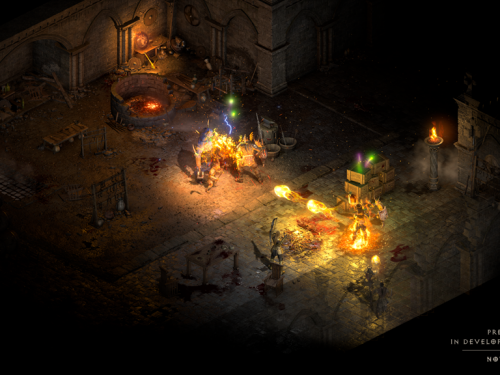 II: RESURRECTED is the definitive remastering of
Diablo II
and its expansion, Lord of Destruction®, two major milestones in the award-winning action role-playing series that Blizzard Entertainment defined the genre with. Veteran players and those who missed the original game twenty years ago can now enjoy the timeless gameplay of
Diablo II
with improved graphics and sound to take advantage of today’s hardware.

THE GOLDEN AGE OF
DIABLO

brings to modern times a diverse cast of characters, now in 3D, with a multitude of settings and mechanics to explore. TO
the amazon
,
the barbarian
,
the necromancer
,
the paladin

they are added killer

of expansion Lord
of Destruction
.

… for
face legendary evils
. Fight against
Andariel,
Duriel,
Mefisto,
Diablo
Y Baal, the most formidable enemies of hell. Defeat them if you can, and then face even greater challenges in the Nightmare and Hell difficulty modes.

A great item system comes with great replayability
. The war that players wage against the Burning Hells is not without its rewards. Item upgrades include, but are not limited to, unique weapons and armor, set items, runes, and runic words or charms.