Boris Johnson: This is the time to be ambitious 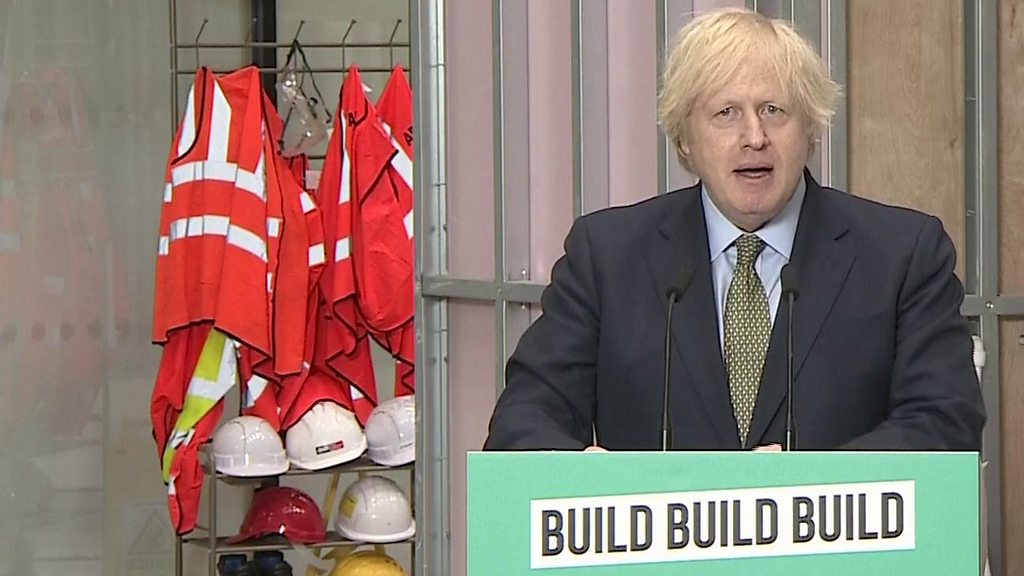 Prime Minister Boris Johnson said the country must “take advantage of this moment” to solve the problems highlighted by the coronavirus crisis.

In a speech to Dudley, the prime minister defined plans for the UK to “recover better” and speed up £ 5 billion in infrastructure projects.

He said the virus accelerated the manifesto’s plans, including on planning reforms.

The “speed of the project” was established with the chancellor, who will explain more details of the recovery plan next week.

Labor say the government must have a “laser-like focus” on job retention as the UK emerges from the blockade.

Johnson said the government plans to “build build builds” to mitigate the economic impact of the coronavirus.

“This is the time to be ambitious and believe in Britain,” he said, announcing an “infrastructure revolution.”

The government needed to “work fast” to support the work, also trying to “level up” the economy so that all parts of the country could benefit from it, Johnson said.

He said planning laws would be simplified to encourage construction. From September, the free shops will be able to be converted into houses without a planning application, as part of the proposals.

And homeowners will be able to build extensions “through a quick approval process” after consultation with their neighbors.

During his speech, Johnson said that the country “cannot continue to be a prisoner of this crisis” and that “they are now slowly and carefully preparing to get out of hibernation.”

“This country needs to be ready for what may come,” he said, saying there will be an “aftershock.”

“We must take advantage of this moment now … to plan our response and to solve the problems that have been brutally illuminated in that gloomy flash,” he said, pointing to the “problems in our social care system”.

He said the government wanted to continue with its plans to “level up” since “too many parts” of the country had been “left behind, neglected, unloved”.

He said the government will not return to austerity and the chancellor will present an economic response plan next week.

He is an avid student of Winston Churchill – and has even written a book about him.

In the past few days, the confrontations that the government has sought to draw have been with former US President Franklin Delano Roosevelt and his “New Deal”.

As pointed out by my colleagues at Reality Check, the plan presented today is somewhat complicated compared to what FDR did, and a good part of it is announcing again what we already knew the government was planning.

But Boris Johnson is attempting to expose the government’s vision – and his pride in saying he wants to spend a lot on revitalizing the economy and getting it out of depression – in a wider context.

In cities “that feel left behind,” he said there are plans to invest in their centers, including in new academic schools, green buses and new broadband.

He said that infrastructure projects in England will be “speeded up” since the UK “must also be a connected kingdom”.

There is a “massive new plan for cycle paths across the country,” he said.