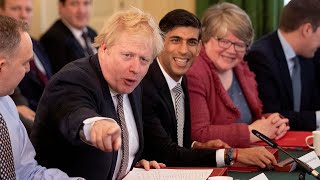 BOris Johnson’s new cabinet has decided to introduce a new point-based immigration system from the beginning of next year that would aim to reduce the number of low-skilled migrants entering the UK.

The Prime Minister discussed the new post-Brexit migration rules as part of a meeting where he urged ministers to “unite” the country by providing “people’s priorities”.

Downing Street said ministers agreed on a “simpler and fairer” migration system that “would restore democratic control of immigration to the British people” and reduce the overall number. Further details are expected to be outlined in the coming week.

This happened when the Prime Minister asked the cabinet to repeat a call and respond to his commitments on SSN recruitment and to reduce waiting times, increasing the number of police and investing in transportation.

Meanwhile, his senior adviser, Dominic Cummings, will convene the aides for a meeting tonight, where many are expected to be moved or demoted as part of a major re-organization.

The number 10 has already started an important shaking of the Treasury, with plans for a new joint economic unit already underway. Numerous Johnson advisors have been transferred to oversee the transition and to help new Chancellor Rishi Sunak prepare for his first budget, which is expected to take place in a few weeks.

It is assumed that the Prime Minister is pushing for the tax rules established by ex-chancellor Sajid Javid, which require a balance of daily spending, to loosen the taps of spending, although Sunak insisted on this on the morning when ministers were yet to find budget savings of around 5%,

Javid showed no animosity this morning towards the Prime Minister, telling reporters when asked if he had a message for him when he left his home: “Happy Valentine’s Day”.