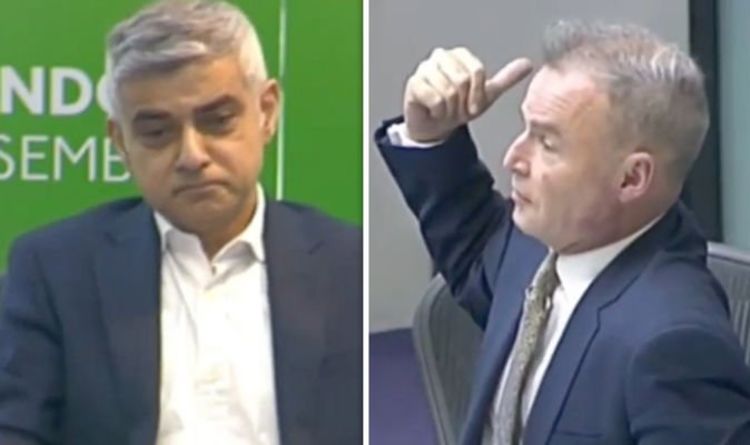 During questions to the Mayor of the London Assembly yesterday, Peter Whittle, leader of the Brexit Alliance group, invited Sadiq Khan to bring the EU flag out of the town hall for Brexit day on 31 January. He said: “I am very happy to hear about your efforts to reduce waste and garbage in London.” Pointing towards the main entrance to the City Hall, the Brexiteer added: “Can you add us, please, that EU flag that is still flying out.

“You have two weeks to do it.

“Put it down and put it in the dustbin!”

While some members of the London Assembly may be heard applauding Mr Whittle, the Mayor did not seem satisfied with Brexiteer’s request.

He reproached: “One man’s waste is the EU flag very proud of another man.”

The mayor’s refusal is the latest blow to the Brexiteers and their plans to celebrate the day Britain finally leaves the blockade.

After Boris Johnson invited the public to “bung a bob” to make Big Ben play when Britain leaves the European Union, over £ 150,000 was raised on the GoFundMe crowdfunding site.

However, the effort appears to have been in vain when the House of Commons Commission, chaired by the President, announced last night that the money could not be used because of parliamentary rules on financial donations.

JUST IN: How Nicola Sturgeon “kept the Brexit support silent within his party”

However, they will turn it into an exhibit in a European Union museum, built in part with British taxpayers’ money.

Brexit Party MEPs lobbied for a flag-lowering ceremony, a Brussels analogue to the campaign to hold Big Ben “Bong for Brexit” in London.

Instead, the President of the European Parliament, David Sassoli, will chair an informal ceremony with British MEPs on the evening of 29 January, shortly after the vote on the Brexit withdrawal agreement.