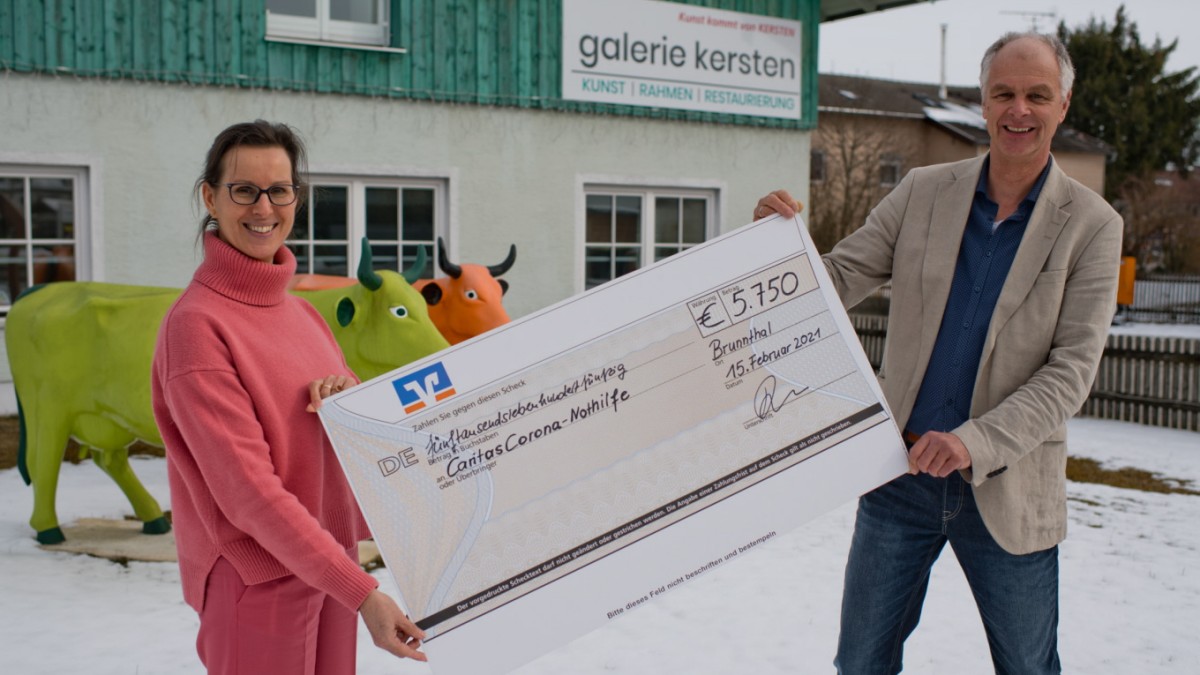 Playing with perspective, ignoring topographical realities, transforming journeys of thought into creative manifestations – as an artist, despite all the hardships, it is currently sometimes easier to sublimate a seemingly unfree reality with little variety. The Munich artist Alexander Befelein, for example, creates idiosyncratic composed, quite realistic, but not realistic graphics, which are characterized by detail finesse, intuitive ciphers and special lines.

The Brunnthaler Galerie Kersten has long been connected to the artist, who was born in Bremen in 1952, has lived in Munich for many decades and enjoys an international reputation primarily because of his individual graphic cityscapes. Since April 2020 the gallery owners Barbara and Holger Weinstock have been offering the framed “Munich Highlights” graphic, which the illustrator created in 2018 for the 40th anniversary of the gallery, in a special campaign with a social purpose. Half of the net proceeds, 250 euros per picture, go to the Corona emergency aid of Caritas in the Munich district.

The response is impressive. So far 23 works have been sold, so that so far 5750 euros have been raised. “That is a great result,” says Barbara Weinstock happily. “We will of course continue the campaign until a total of 50 graphics have been sold. The aim is to raise a donation of 12,500 euros.”

This week, together with her husband, she handed over a symbolic check to the Caritas district manager Matthias Hilzensauer for the 5750 euros for Corona emergency aid. “We are very happy about this donation,” says Hilzensauser. It will primarily be used to maintain the “mobile workshop” offer. Volunteer members from various areas of the world of work help welfare recipients, the unemployed and other needy people free of charge with repairs at home: for example, if the washing machine goes on strike, the refrigerator is broken, the defective bike has to be made roadworthy again or a curtain rod has to be fitted.

In the district there is the Ottobrunn mobile workshop in the south and the Unterschleißheim mobile workshop in the north. These offers are usually also financially supported by the district of Munich, but funding is currently suspended due to other priorities. “In this respect, we are very dependent on donations,” says Hilzensauser, especially since the offers are “very much needed” in pandemic times. In general, the need is also increasing in the district, which is particularly evident in the area of ​​debt advice and insolvency advice offered by Caritas, which is increasingly noticed.

The Kersten Gallery, which has a branch on the Viktualienmarkt in Munich in addition to the headquarters in Brunnthal, is not in danger of bankruptcy despite the current restrictions, but of course Holger Weinstock is currently not happy with the situation. “We muddle through like that,” he says. Visits to customers, where the primary focus is on framing or restoring pictures, are allowed – the gallery also has a corresponding workshop – but overall the level of work is already very low. The exhibition “Star Wars and Marvel Comics”, which opened at the beginning of December, had to be closed again after a week and a half due to the lockdown, which was also a shame as the response was very good. At the moment, the works of Marvel artists and Star Wars artist Robert Bailey are still hanging in Brunnthal, and Holger Weinstock is speculating that he might be able to show them again. Perhaps it helps that the Weinstocks have proven with their fundraising campaign that they are on the good side of power.

During the lockdown, the graphic “Munich Highlights” can be ordered by phone (08102/1440) or via the contact form on the gallery website and picked up later (www.galerie-kersten.de). But it will also be sent.