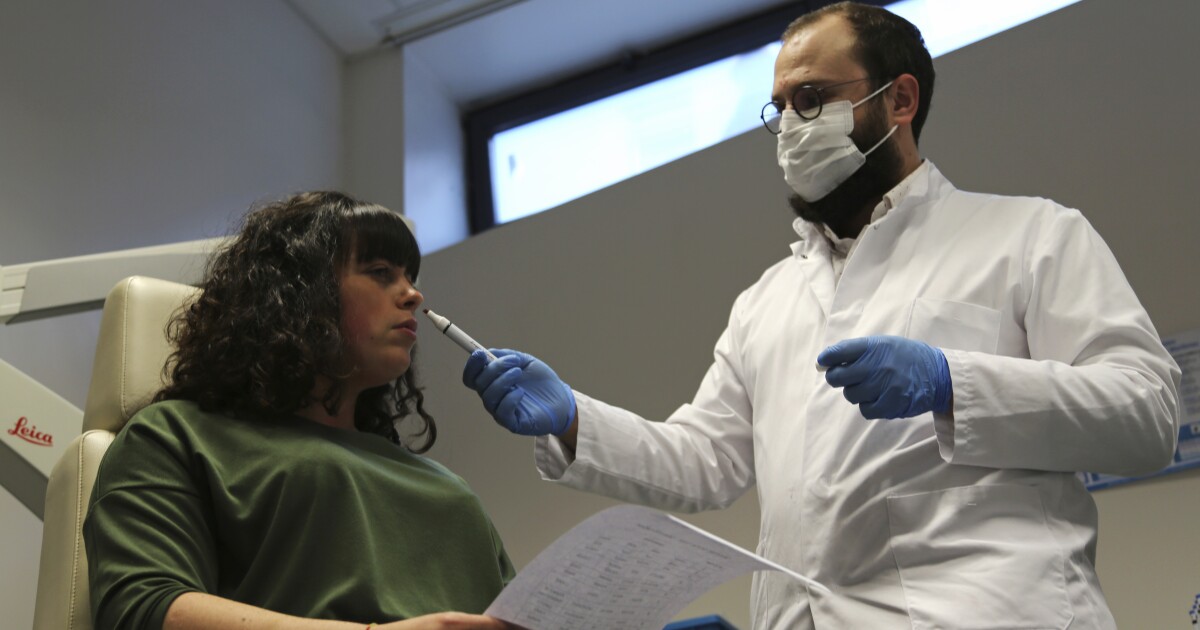 The doctor inserted a miniature camera into the woman’s right nostril, and her entire nose lit up red as a tiny lamp went on.

“It tickles a bit, doesn’t it?” He commented as he explored the patient’s nostril, who cried out at the discomfort.

The woman, Gabriella Forgione, however, was not complaining. A 25-year-old pharmacy employee, she willingly volunteered to assist a Nice hospital in efforts to regain the smell of people who lost it when contracting the coronavirus. She was infected with COVID-19 in November and lost her taste and smell.

Being deprived of the pleasure that food and its smells give you is hard both physically and mentally. No more cute and ugly smells. Forgione is losing weight and confidence.

“Sometimes I wonder, do I stink? ‘” He admitted. “I usually wear a perfume and I like things that smell good. Losing my sense of smell affects me a lot ”.

One year after the arrival of the coronavirus, doctors and scientists continue to try to understand and treat the anosmia – loss of smell – often associated with COVID-19 and that makes life bitter for those who suffer from this symptom.

Specialists say that there is much that is not known about the virus. The loss or decrease of smell is so common in patients with COVID-19 that some researchers believe that this may be an element that allows the virus to be detected in countries with few laboratories.

In most cases, the loss of smell is temporary and lasts for at most a few weeks. But a small percentage of patients say they do not regain that ability even after the symptoms of the virus have disappeared. Some say that six months after overcoming the infection, they still cannot smell. And a few have not done it for almost a year.

Researchers believe that the vast majority will regain their sense of smell sooner or later, but fear that some will never do so. And they are concerned about the possibility of this creating depression and other problems.

“Their lives are fading,” said Dr. Thomas Hummel, who runs a clinic specializing in smell and taste at the University Hospital in Dresden, Germany. “People will survive and keep doing their thing. But their lives will be much poorer ”.

At the University Institute of the Face and Neck in Nice, Dr. Clair Vandersteen held tube after tube of different smells to Forgione’s nose after examining the pits with his camera.

“Can you smell something? Nothing? Zero? OK ”, he said while the woman answered over and over again that she was not.

Only the last tube caused a reaction.

The test completed, Vandersteen made his diagnosis.

“The smell has to be very strong for you to feel it,” she told the patient. “You didn’t totally lose your sense of smell, but this is not good.”

He sent her home with a six-month smell rehabilitation program. Twice a day you should choose three things that smell strong and smell them for two to three minutes.

“If you feel something, great. If not, it is not serious. He insists. Concentrate and try to imagine a lavender blooming, ”he told her. “You have to persevere.”

Losing your sense of smell can be more than just a minor inconvenience. You cannot smell the smell of a fire, of a gas leak, of burning food. You can ignore the bad smell of a diaper, of a shoe after stepping on something or of your own sweat.

READ  3 million vaccines on the way to Americans

And as poets well know, there is a strong relationship between scents and emotions.

“Eating is no longer fun for me,” said Evan Cesa, an 18-year-old who lost his sense of smell five months ago.

Cesa is one of the anosmic patients being studied in Nice, who before the pandemic used smell to diagnose Alzheimer’s disease. They also use fragrances to treat children’s post-traumatic stress disorder after a 2016 terrorist attack in which an individual hit a crowd with a truck and killed 86 people.

The researchers are now trying to take advantage of their experience in COVID-19, with the collaboration of perfume producers in the neighboring town of Grasse.

They even do language and attention tests, trying to determine if COVID-19 causes cognitive difficulties, including concentration problems. Cesa, for example, said “boat” when he should have said “kayak.”

“That was totally unexpected,” said Magali Payne, a speech therapist. “This boy shouldn’t have had any language problems.”

“We must continue investigating,” he added. “We find things with every patient we see.”