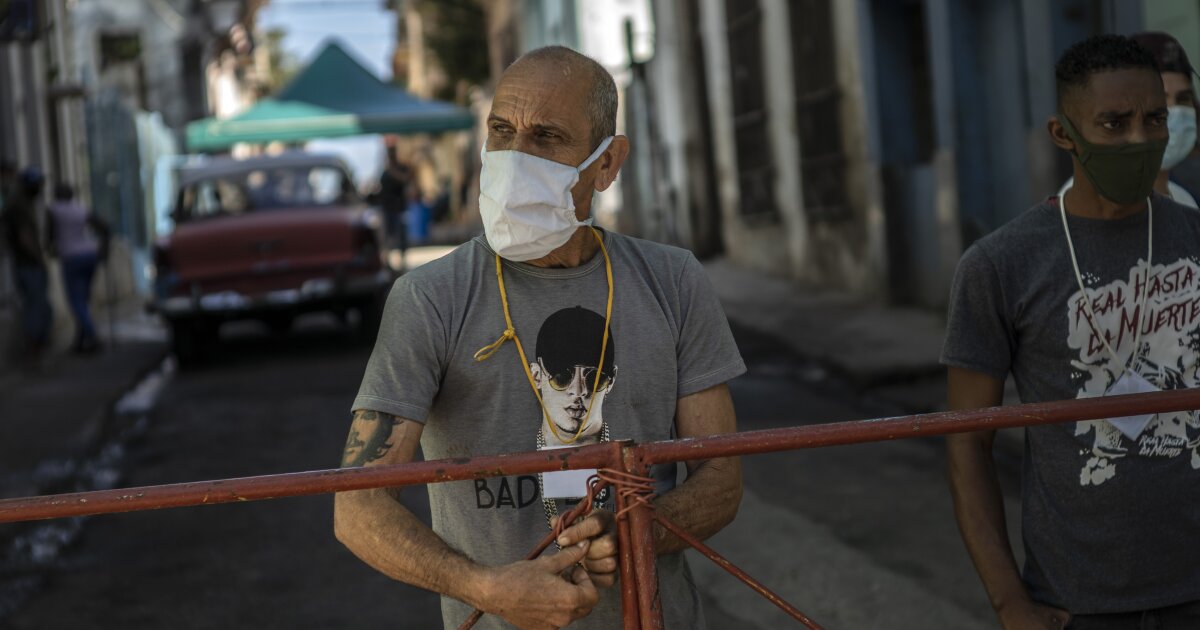 Cuba began mass production of its own vaccine against the new coronavirus while dozens of streets in the capital and other provinces remained in quarantine and closed to traffic.

In the midst of an outbreak that began in January and that did not stop escalating in infections and illnesses, the capital – with two million inhabitants – became one of the epicenters of new infections, so the authorities kept several closed highways of the Centro Habana municipality, especially the Popular Council of the Sites, The Associated Press confirmed on Monday.

“We are trying not to spread the epidemic,” Vladimir Matos, a 45-year-old government official, told AP, posted next to one and a half meter high metal fences that impede the passage on the corner of Reina streets. and Manrique. “We have an assurance organization here. The infected people are not in their homes, but in (specialized) centers ”.

Along with Matos, there are police who control the passage by means of an identity document so that only residents enter and in general no one leaves. The authorities set up giant tents where bread, eggs and other foods are sold for families to purchase. Centro Habana has 152,000 inhabitants, many of them living in dilapidated buildings that have been converted into barracks or “solar” as they are called on the island.

“It’s pretty well organized,” said neighbor Eduardo Jonhson, a 61-year-old retiree. “I have a perception of risk, I did the ‘screening’ (tests) … it is not fear, it is precaution. I don’t make visits and when I go out I take all the measurements ”.

In other capital territories such as Old Havana and Arroyo Naranjo there were also closures of blocks, blocks and buildings and some streets have yellow stripes and police control that prevent the passage.

During his television appearance, the island’s director of Epidemiology, Francisco Durán, indicated that since March 2020 to date there have been 45,361 confirmed cases of COVID-19 and of them 300 deaths – four reported this Monday. In addition, 19,873 people are admitted to specialized centers, of which 4,968 are active cases and the rest are under surveillance or suspects.

For months, Cuba kept the pandemic under relative control, but an outbreak broke out after in November the authorities ordered the opening of airports and authorizations for commercial flights – which had been canceled since March – and a de-escalation of the measures of control.

Although tourists were received, they remained generally isolated from the population. However, the imminence of the holidays attracted thousands of Cuban residents who traveled to see their families and spread the virus. The government again imposed measures such as the obligatory nature of tests for travelers, the reduction of flights – especially from the United States, Panama and Mexico – and the mandatory quarantine in specialized centers.

Classes also had to be suspended – which had started – restaurants and recreational centers were closed again, public transport was limited and a night curfew was imposed in the capital itself. The use of the chinstrap is still mandatory, as well as social distancing.

In parallel, the National Center for Biopreparations (BIOCEN) reported this weekend that the Sovereign 02 vaccine, developed by the Finlay Institute and with which the island hopes to complete the application of 150,000 doses – its phase III, has already begun to be manufactured at scale clinical trial – in March.

“The industrial production of the # Soberana02 vaccine has already been introduced at @BIOCEN. Great has been the effort of our researchers and technologists to get here, ”Eduardo Martínez, the president of BioCubaFarma, the state company in charge of manufacturing medicines on the island, wrote on his Twitter email account.