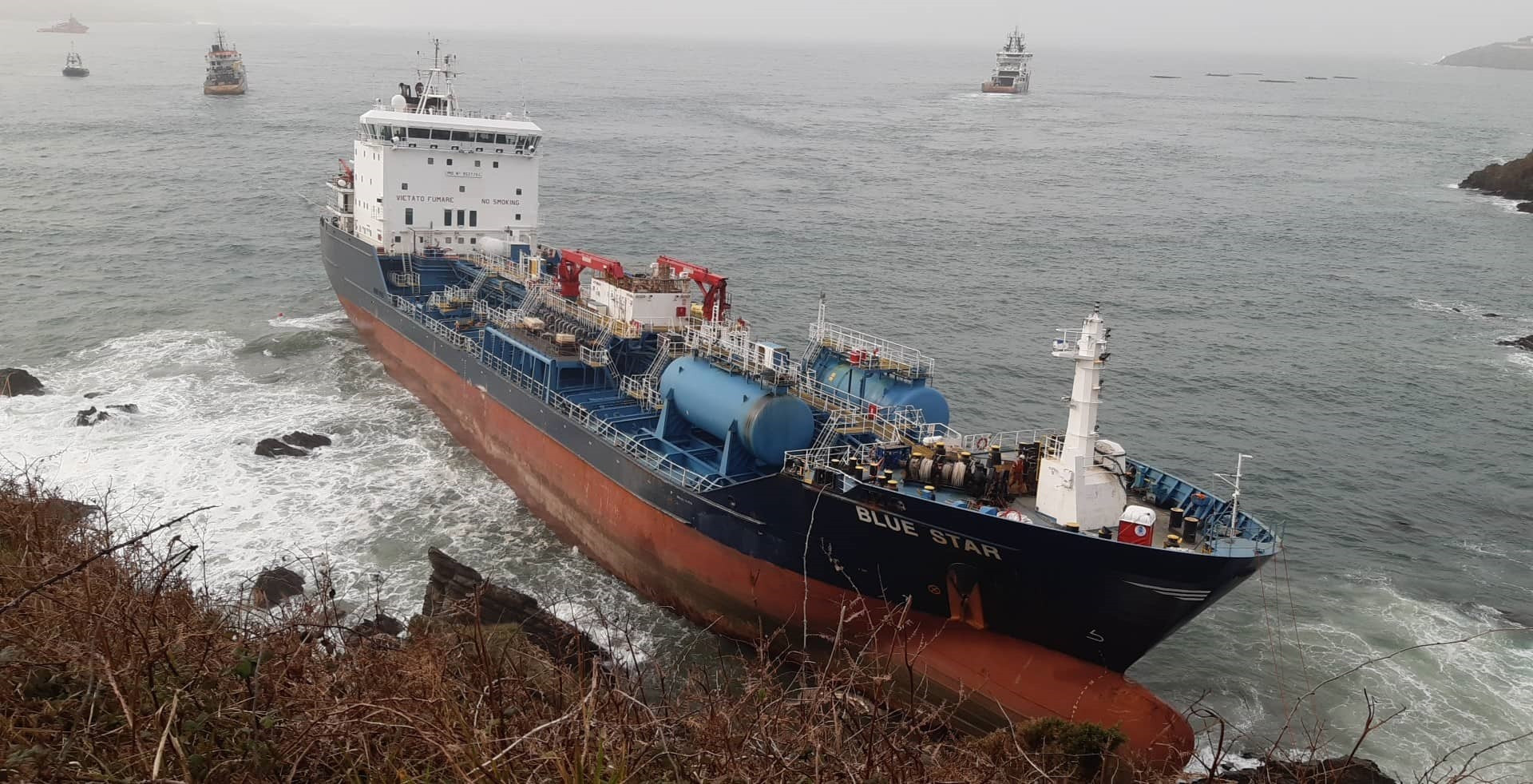 The chemical tanker was repaired in the Turkish city of Tuzla after a failed agreement with Navantia, although its owner had said it would be scrapped

This Sunday, November 22, marks a year since the chemical tanker ‘Blue Star’ was grounded, which ran aground at around 23.50 hours in the area of ​​Punta Miranda, in Ares (A Coruña), where it would remain 17 days. After being dislodged, it was in the Navantia Ferrol shipyards until March, when it undertook a 20-day trip to the Turkish city of Tuzla for repair.

The ship, 129 meters long, suffered the incident between the beaches of Barrosa and A Canteira due to a problem in the machine, specifically a fire.

It happened when he was leaving the Ares anchorage to take a pilot and enter A Coruña, but the breakdown left him at the mercy of the wind and waves, on a night when the orange alert was decreed with waves of five meters and winds of one 100 kilometers per hour.

The ship came from Bilbao and was heading to load 6,000 tons of some unspecified chemical product at the Repsol terminal in the Herculean city.

After two unsuccessful attempts to tow it taking advantage of the high tide a few hours after it ran aground, it was decided to launch an operation to remove the 105 tons of fuel and diesel that it had inside, with the aim of preventing the fuel from reaching the sea.

Thus began a complex operation, which for a few days turned the coastal town of the Ferrolterra region into one of the information points in Galicia and Spain.

For this work, a specialized company was hired, the Dutch SMIT Salvage, which devised a system to transfer the fuels from the stern to the bow, mixing them and sending them ashore through a hose held by a zip line, for which a large concrete base had to be made on the ground.

In parallel, two powerful tugs traveled to the Ares estuary, the ‘Boka Pegasus’ and the ‘Union Princces’, specialists in carrying out maneuvers of this type. Meanwhile, day by day the mixture of fuel and diesel was transferred to tanker trucks on land.

On December 10, at around 2:20 pm, minutes before high tide, the high-seas tugs began to tow the ‘Blue Star’ with the help of highly resistant lines.

They managed to unload the ship and transfer it to the outer port of Ferrol, where it spent the night before being taken, the next morning, to one of the piers in the inner port of this same city.

ENTRY INTO THE NAVANTIA DOCK

In this place the ‘Blue Star’ spent several days, while the owner and managers of the Navantia company negotiated its repair. Thus, on December 20, the ship was introduced into the ‘Reina Victoria’ dock of the public naval company to assess its damage and close a price.

After several negotiations, the assembly and the shipyard did not reach an economic agreement and the ‘Blue Star’ was removed from the dock, after carrying out some emergency works on its hull, and moored in one of the Navantia docks.

It was from there when, on March 10 – almost four months after he was stranded – he undertook the trip to Turkey after its owner announced that it would not be repaired due to its high cost, but that it would be taken to this country for its scrapping.

To be able to move this ship to this country, the tugboat ‘VB Hispania’, from Grupo Boluda, was hired and arrived in the Turkish city of Tuzla on March 30, twenty days after its departure. There it was docked at one of the docks of the existing naval conglomerate in this town on the Sea of ​​Marmara.

According to sources consulted by Europa Press, the chemical tanker, which has not been recorded again, would be repaired in this place and not scrapped, as the owner came to assure at first, as an apology used to not repair the ship in Ferrol.