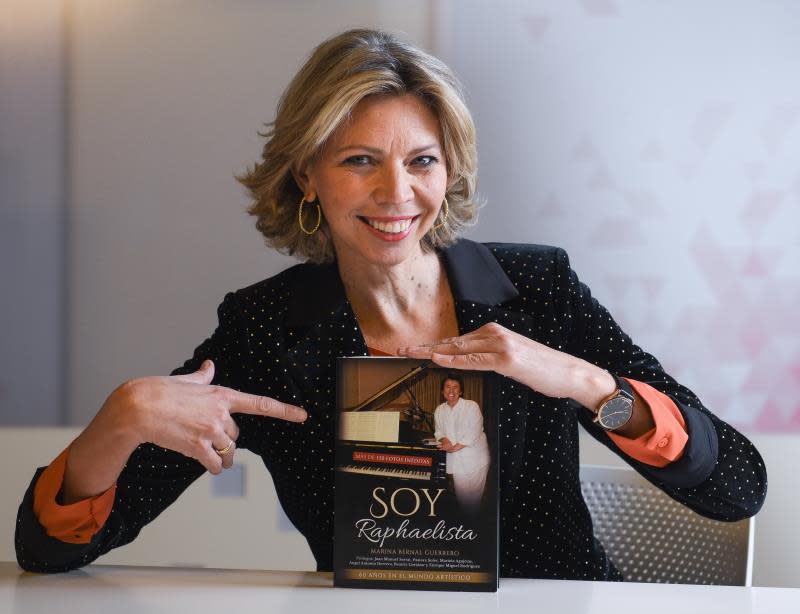 Seville, Feb 23 (EFE) .- “Humanity snores, but the artist has an obligation to make it dream or he is not an artist,” the writer Enrique Jardiel Poncela pontificated and that is what the journalist Marina Bernal maintains that Raphael has done , an artist who will be honored on February 28 as the Favorite Son of Andalusia, whom he considers “a phenomenon” in his biographical essay “I am a Raphaelite”.

Marina Bernal, author of another biographical sketch of Rocío Jurado, has told Efe that the career of the Linarian singer has been as long, sixty years now, as faithful has been the legion of followers that he has been adding in these six decades.

Initially conceived as “a birthday present” for the artist, Bernal reviews in “Soy raphaelista” (Sevilla Press), based on more than 35 interviews, testimonies and unpublished photographs, the artist’s career, probably together with Julio Iglesias, more international that Spain has given birth in the last half century and the movement that has emerged from it: “Raphaelism”.

As the artist expressed it to Marina Bernal and she collects in these pages: “It is something that is carried inside and also is never left, like a beneficial drug that does not hurt”.

For Bernal, it is much more: “Raphaelism is a feeling of admiration and respect, but it is also a passion that makes fans go in the same boat as their artist.”

Although the initial idea was “to make a human profile of Raphael and follow up on his career through the people who have been loyal to him these sixty years”, an unexpected event gave rise to the idea of ​​delving further into the genius of Linares and making this “biographical essay”, as the author describes it.

READ  In the bitter fight against racists and demons

“I knew Rocío Jurado very, very well. Many of his followers are also Raphael’s. And in one of the presentations of my previous book, ‘Canta, Rocío, canta’, a fan asked me: ‘Marina, why don’t you also do a job on Raphael?’ ”… And so he got down to the work.

If there is something that Bernal highlights above all about the artist, what makes her a ‘raphaelista’, it is her work ethic: “She has been working for sixty consecutive years, touring and releasing records. There is no other phenomenon like him ”.

To exemplify the conscientious facet of the singer, he relates an anecdote of the festival that launched Raphael to stardom: “When he went to the Benidorm festival, he remained locked in the hotel for the three days it lasted, like a cloistered monk, thinking that his future depended of that performance. The rest of the artists were dedicated to walking along the beach ”.

Raphael made headlines both for his double concert in Madrid and for the one he gave on Spanish Television on Christmas Eve, attracting thousands of people at the Wizink Center and millions of viewers in front of the small screen. All of them, from different generations. Something that the journalist values ​​substantially: “What differentiates Raphael from other artists is that he incorporates the young people of each decade into his followers. Your audience is continually renewing itself. His creativity and perseverance are unique ”.

For someone who started singing at the age of four, who won his first prize with nine in Austria and who consecrated himself under the attentive enthusiasm of Paco Gordillo, the clinical eye that discovered him, is not an option anything other than, as emphasizes the Sevillian, “an iron discipline.”

And the same applies to your ability to make a mark. When in Franco’s Spain it was still forbidden for artists to perform in the Soviet Union, Raphael managed to leave his signature written forever in cold Russia. His double concert in 1971 in Saint Petersburg and Moscow led, as Bernal assures, that “even the Russian Minister of Culture was an admirer of Raphael.”

READ  Meghan Markle welcomes Katy Perry as a neighbor, but the singer arrives with a poisoned gift

The work collects the testimonies of two Russian women who were there: Elena Voronina and Elena Abramova.

Voronina, a member of the ‘Saint Petersburg Raphaelite Union’, relates that she entered as one person and left as another.

Abramova recalls that Raphael caused such a scandal in Russia that many citizens began to take an interest in the Spanish language.

From the giant of the East, where the projection of ‘Say what they say’ was seen by more than forty million spectators, requests to Bernal to make the version of the book in Russian are crowded. “It’s our next project,” he says. At the same time, he announces that he also hopes the book will be translated into English.

Another participant in the work is Joan Manuel Serrat, Raphael’s contemporary. In the interview made expressly for the book, he emphasizes that ability to maintain the attraction of the public: “An artist who lasts the years that we have lasted has to have a loyal audience, and fidelity is a two-way attitude” .

The Sevillian journalist also makes known the bond that has been forged between the fans of Jaén: “Personal ties are established with Raphael; Most of his oldest followers know him personally, they hold annual meetings in which he exchanges opinions with them, they follow him on tours and concerts… ”, he emphasizes.

Bernal also explores the most personal and unknown facet of the pioneer of ballads: “He is tremendously familiar and shy; he is an artist when he is on stage; when not, he is a person devoted to his family. “

“He’s a shy man in disguise,” adds the author while ensuring that, in fact, he never sings at family and friends gatherings. That’s Raphael.