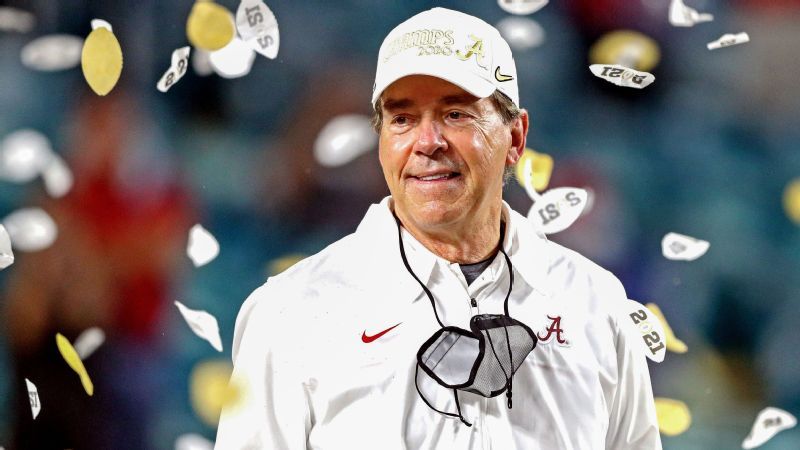 Nick Saban didn’t need to win a seventh national championship to have his name on the list of the best active coaches in American sport, although his most recent title guarantees him to be considered the best of the best.

Saban and the Alabama Crimson Tide beat the Ohio State Buckeyes 52-24 to win the 13th title in their history on Monday night, the sixth time they have been crowned in the past 12 years under Saban. The championship put Saban one ahead of another legendary Alabama coach, Paul “Bear” Bryant, by the most by a coach in the AP poll era (since 1936).

Saban took over the reins of the Crimson Tide for the 2007 season, creating a modern dynasty in college football that is unprecedented. His status as one of the greatest coaches of all time is unquestionable, but he is not the only one to make his mark in recent times when it comes to sports and its best coaches.

With that in mind, we offer a ranking of the best current coaches in American sports, adding European football as a means of comparison between the competitions that Spanish-speaking fans are passionate about.

We can’t talk about the greatest dynasties since the turn of the century without mentioning Bill Belichik’s New England Patriots, who have won six Super Bowls since 2001 to tie the Steelers for the most in history.

In that span, Belichik and the Patriots only missed out on the postseason three times, including this season when they were affected by the departure of quarterback Tom Brady and the details created by the coronavirus pandemic.

Either way, Belichik’s place is secure as one of the best coaches in NFL history, currently setting the bar as number one on the list.

The Alabama Head Coach claimed one more national championship after his first glory in 2003.

Maintaining excellence in professional sports is a huge challenge for any coach, but it goes hand in hand with the decisions and vision of the management of the franchise in question. In collegiate sports, the story is different, and no coach plays the game of recruiting quite like Saban, who has turned the Crimson Tide into a title machine and elite player factory for the NFL.

Alabama’s six championships in 12 seasons are the shortest span to win six national titles in college football, surpassing the previous mark of 19 seasons set by Alabama from 1961-79, and Saban is the first head coach to win a national championship in 3 different decades (2000, 2010, 2020).

In 14 seasons in Alabama, Saban has a .881 winning percentage with six national titles, seven SEC titles, finishing nine times in the top 5 in the AP poll in that span.

No manager has recently made his mark on a club like Klopp in Liverpool, bringing the team back to glory after a lethargy that saw them give way in English football, and Europe in general, to several of their most staunch rivals.

Champions League and Premier League titles in back-to-back seasons sealed their place as an important figure in the history of the Reds, who remain in position to win more in 2021 despite a series of injuries that affected their performance in the former. part of the current season.

With respect to Saban and Alabama, when it comes to recent dynasties in larger collegiate sports, nothing compares to Auriemma’s accomplishments leading the Connecticut Lady Huskies in women’s college basketball.

Under Auriemma, the Huskies have won 11 national titles, including six in an eight-season span of 2009-2016 when Auriemma topped John Wooden (11-10) for the most titles by a coach in college basketball history ( men and women) and the Huskies made history as the first Division I women’s team to win four consecutive national championships.

During those years, several of the best players in history have passed through Storrs such as Diana Taurasi, Maya Moore, Sue Bird, Breanna Stewart and Tina Charles. Let’s not forget the three Olympic medals (Sidney 2000, London 2012 and Rio 2016) leading the powerful American squad.

While Auriemma has made his mark on the women’s side of college basketball, Coach K has excelled in the men’s side not only as one of the best today, but perhaps the best to do so in history, possibly sharing the throne with the legendary. Wooden from UCLA.

Since 1980, no team has won more collegiate championships (5) or appeared in more Final Fours (12) than Duke. During that time, Krzyzewski became the first coach to reach 1,000 Division I victories, earning the respect and adoration of thousands of players in the process, including those in the NBA who led to gold in three editions of the Olympic Games (Beijing 2008, London 2012 and Rio 2016).

For many, Catalan is still the standard when it comes to the best technicians in the world. Innovative and emulated, Guardiola would be chosen by the vast majority to run their respective clubs if money and competition weren’t factors.

Guardiola currently has the double motivation to achieve the European success in the Champions League that Manchester City longs for, in addition to recovering the Premier League scepter that Liverpool snatched from him in 2019-20 after winning consecutive championships from 2017 to 2019.

No coach in the world would be more valuable to his club than Cholo Simeone to Atlético Madrid. During his time as coach of the colchoneros, Simeone has won seven titles, including a LaLiga title in 2013-14, and year after year they present a quality team that competes with the giants of Real Madrid and Barcelona, ​​despite a budget. very inferior, which is a remarkable feat in itself.

Atlético reached two Champions League finals under Simeone, falling tightly both times to their Madrid rivals in matches that came very close to winning, and their best moment in 2020 was eliminating defending champion Liverpool in the round of 16. As Simeone evolves in offensive game tactics, the club’s defense remains the best in Europe, ensuring that Cholo and his team will be in position to compete for titles in 2021.

While Pop had as a contemporary one who many think is the greatest coach in NBA history in Phil Jackson, the San Antonio Spurs coach’s résumé speaks for itself about his impact and legacy on the game.

Pop double-hatted from management to the court to help create and sustain the impressive stretch that saw the Spurs qualify for the postseason in 22 consecutive seasons, winning five titles in the process. That consistency is unmatched in the NBA, and it helped earn him the admiration of a generation of players who put him in his own class among the best coaches today.

While Francona is best remembered by many as the Red Sox manager who finally put an end to the ‘Curse of the Bambino’, it is his time at the helm of Cleveland that solidified his case as one of the best in the sport.

Francona has made adjustments to his philosophy and playing moves with a view to putting his players in the best position to win. He led Cleveland to the postseason in five of his eight seasons, falling within one victory of winning the World Series in 2016, despite the back and forth of players that characterize the small-market team. Thinking about that, 2021 will be a great challenge for Francona and his squad, following the recent trade that brought the face of the franchise, Francisco Lindor, to the Mets.

Although the Portuguese manager’s greatest triumphs seem to be farther into the past with each passing season, his media presence on and off the pitch is unrivaled in European football.

Mourinho accepted the challenge to coach Tottenham in November 2019, replacing another standout in Argentine Mauricio Pochettino. Mou in such a way threw his hat to the middle in the English contest that his rivals Guardiola and Kloop dominate the last campaigns. And although the path to Hotspur’s glory is not guaranteed, the figure of Mourinho gives them a presence that transcends sport to spearhead their project at a time when the bet is not safe one way or another.