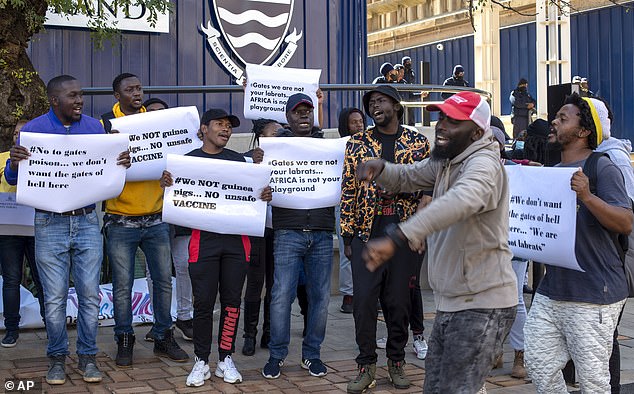 About 2,000 people in South Africa are expected to take part in the Johannesburg process, which started last week.

The vaccine is also being tested in the UK, Brazil and researchers say it needs to be tested in Africa to make sure it isn’t affected by local conditions in the country.

But the demonstrators gathered at the University of Witwatersrand, where the trial is based, burned their masks and claimed that tests were conducted on poor people who do not understand the risks.

“People chosen as volunteers for vaccination seem to come from poor backgrounds, not qualified enough to understand,” said protest organizer Phapano Phasha before the event.

“We believe they are manipulating the vulnerable,” added the activist and political commentator. Around 2000 volunteers are expected to take part in South Africa.

People protest against Covid-19 vaccine tests in Africa outside the University of Witwatersrand in Johannesburg, South Africa, on July 1st. Banners were said that said “NOT guinea pigs” and “We are not your labrates”

Researchers must first make sure the vaccine works elsewhere before bringing it to Africa, said Phasha.

“The narrative we have is that our continent is a landfill,” he said in reference to the widely circulated observations made at the beginning of the year by the French researcher Jean-Paul Mira.

Mira said: “Shouldn’t we do this study in Africa, where there are no masks, treatments or resuscitation?” and compared it to AIDS studies.

“In prostitutes, we try things because we know they are highly exposed and that they don’t protect themselves.” 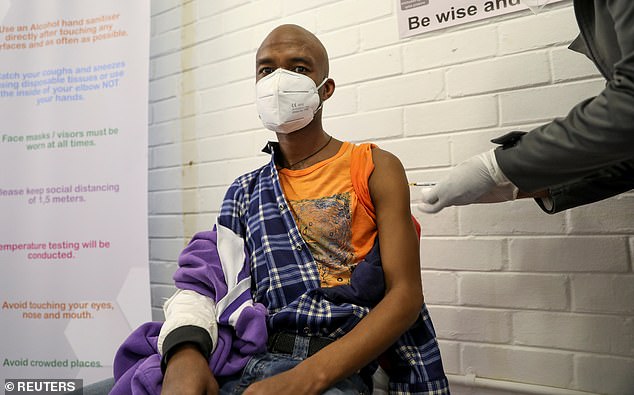 Vaccine study managers in South Africa provided volunteers with an explanation of the study and possible risks. Above, a volunteer received an injection from a medical operator during the first human clinical trial for a coronavirus vaccine. 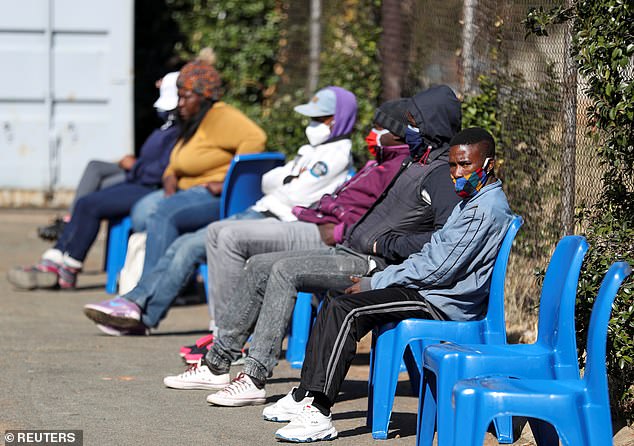 The vaccine volunteers are waiting to receive an injection at the Baragwanath hospital in Soweto, Johannesburg

The French researcher later apologized for his comments, but continues to circulate on social media among opponents of the vaccine.

It is important that vaccines are tested in Africa to see how they behave in the local context, vaccinology professor Shabir Madhi, leader of the new study in South Africa, told reporters and others in a webinar on Sunday.

He said the volunteers were given an explanation of the trial and possible risks and had to mark 80% on a questionnaire to participate. 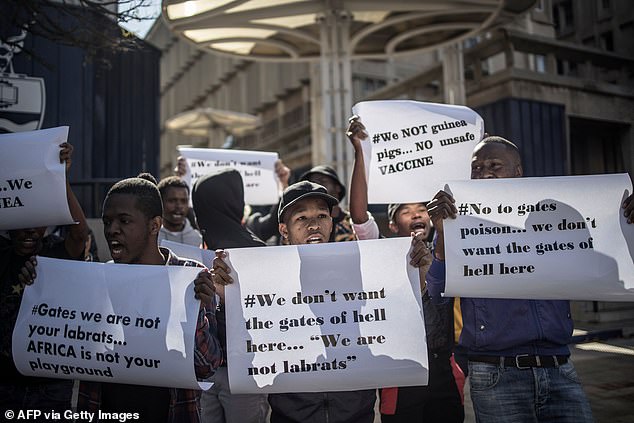 Phasha asked why the wealthiest parts of South African society had not been targeted.

“I believe in science,” he said. ‘And I think science has managed to solve most of the problems that society faces. I’m not against vaccinations, I’m against profit. “

Demonstrating comrades sang and danced with banners that said “We are not guinea pigs” and “No safe vaccines”.

“If you want to try, try in areas they call the world’s epicenter,” said demonstrator Sean Goss.

Experts noted an increasing resistance and misinformation about testing across the continent.

Anti-vaccine sentiment is escalating to “the worst I’ve ever seen,” said the CEO of the Alliance for GAVI Vaccines, Seth Berkley, during a conference last week.

“In general, people in Africa know about diseases and want to protect each other,” he said. “In this case, the rumor mill was dramatic.”

The trial is part of one already underway in Britain to test the vaccine and was developed at the University of Oxford.

Meanwhile, anger between African and other health officials has been swift in response to Mira’s comments earlier this year.

The Ethiopian director of the World Health Organization, Tedros Adhanom Ghebreyesus, denounced them as “racists” and “hangovers from a colonial mentality”.

The head of the African Centers for Disease Control and Prevention, John Nkengasong, called the comments “very disgusting” and “condescending”.

“Africa CDC will continue to work closely with the World Health Organization to ensure that only ethically and scientifically valid clinical trials for vaccines and therapies will be conducted in Africa, using exactly the same standards and principles as those used elsewhere. of the world, “Nkengasong said in a statement.

“These principles will be guided by respect for the dignity of Africans, for charity and non-maleficence and for justice”.

Africa has witnessed problematic tests and treatments over the years.

Some families in Nigeria won payments in a legal fight with Pfizer after several children died of meningitis in a clinical trial for an oral antibiotic in 1996.

And earlier this year, the Gender Equality Commission in South Africa said that dozens of HIV-positive women were forced or forced to be sterilized after giving birth in public hospitals.

It is unclear when the first study in Africa on the Covid-19 vaccine will begin to show results, but Madhi, worried, said that the local wave in confirmed cases could mean seeing them months earlier than expected.

South Africa now has more than 151,000 confirmed cases of coronavirus, the most on the African continent. Africa has over 400,000 cases altogether.

As the pandemic speeds up in Africa, health officials are calling for any vaccines to be distributed equally across the world. 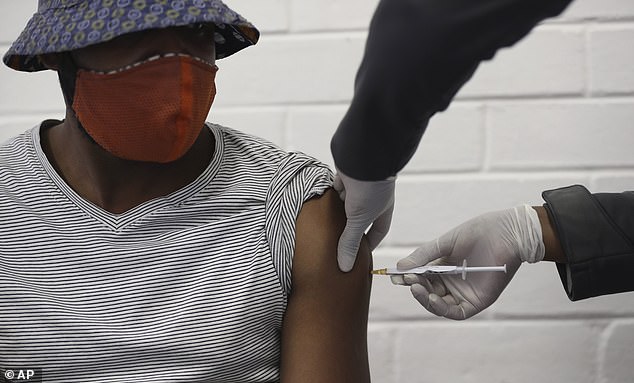 A volunteer wearing a protective mask is injected into the arm during the vaccine trial. The trial is part of one already underway in Britain to test the vaccine and was developed at the University of Oxford.

A quarter of all vaccines for other diseases are used in Africa and yet the continent has poor production capacity, putting its 1.3 billion people at risk of being close to the end of the line for any vaccine.

“If we don’t use this moment when, for better or for worse, we have people’s political attention, we will regret it,” said Chikwe Ihekweazu.

Africa must play a role in new vaccine studies, the vice chancellor of the University of Cape Town, Mamokgethi Phakeng, and the president of the South African Council for Scientific and Industrial Research, Thokozani Majozi, wrote this month in the Sunday Times newspaper .

They too raised the comments of the French researcher and criticized requests for an “African only” approach to finding a vaccine, saying it would have moved the continent further away from the global scene.

“It would be tragic if Africa decided not to take part, at all levels, in clinical trials of a Covid-19 vaccine – or any medical treatment that could save lives,” they said.