An employee of a pub in Edinburgh puts chairs together. Due to the increasing number of infections, the Scottish government has announced further restrictions. (Andrew Milligan /PA Wire /dpa)

The end of the preliminary dry spell was only three months ago, but pubs and restaurants in England could have to close again next week in view of the sharp rise in the number of infections. And thus follow Scotland’s example. In most of the northern province, including Glasgow and Edinburgh, a 16-day mandatory break for the catering industry has been in effect since Friday. In less densely populated areas, the inns are only allowed to serve alcohol outside.

Prime Minister Nicola Sturgeon justified the measures as a “short, sharp action”. A few weeks ago, the restrictions for the whole country were tightened. For example, there is a stricter mask requirement, pubs, bars and restaurants have to close at 10 p.m. and according to the “Rule of Six”, a maximum of six people are allowed to meet. But especially in the north of England, such as Newcastle, Manchester and Liverpool, the number of infections has recently risen sharply – despite the stricter measures compared to London, which have been in place in the Greater Manchester area for two months.

more on the subject

British government does not rule out national lockdown

The British are not only concerned about Brexit, but also increasingly about the Corona crisis. Threaten …

The chaos is also due to the system. While Wales, Scotland and Northern Ireland have their own decentralized state governments and can decide on local restrictions themselves, Boris Johnson plays a dual role. As prime minister, he rules the entire kingdom, but is also the head of the country because that part does not have a separate state government. And Johnson is under massive pressure, including in his own conservative party.

One minister complained that the situation was “getting out of hand”. The number of infections in the kingdom has been increasing for weeks. 17 540 new cases were reported on Thursday for the past 24 hours, on Friday there were just under 14,000. This week, an average of 70 people who tested positive for the coronavirus died every day. The ONS, the National Bureau of Statistics, estimates that one in 240 people in the UK is currently infected with the virus. The trend is “clear and very worrying”, it said on the part of the health authority Public Health England. Not only that, apparently again, restrictions on contact between different households are being considered. Owners of pubs, restaurants and cafes in the north of England and the Midlands fear that they too will have to turn off and close their taps next week.

Concern for a quick economic recovery

There is great fear of further sales losses, bankruptcies and mass layoffs in the hospitality industry. The Greene King chain has just announced that it will close 79 pubs and cut up to 800 jobs. With the uncertainty, the concern about a quick recovery of the drastically collapsed economy grows. At the same time, the country has recorded more than 42,500 deaths from corona than any other country in Europe. The government’s course is seen as a tightrope walk.

The Scottish Hospitality Group, an amalgamation of some of the nation’s best-known pubs and restaurants, accused First Minister Sturgeon of “signing the death warrant” for many companies. The Edinburgh Chamber of Commerce described the measures as a “coffin nail” for numerous businesses in the hospitality industry. Nevertheless, critics denounce the previous restrictions as inconsistent and the communication from Downing Street as confusing.

more on the subject

Cordon off and curfew

Almost everywhere in Europe, rising numbers of corona infections are causing new concerns for governments. In … 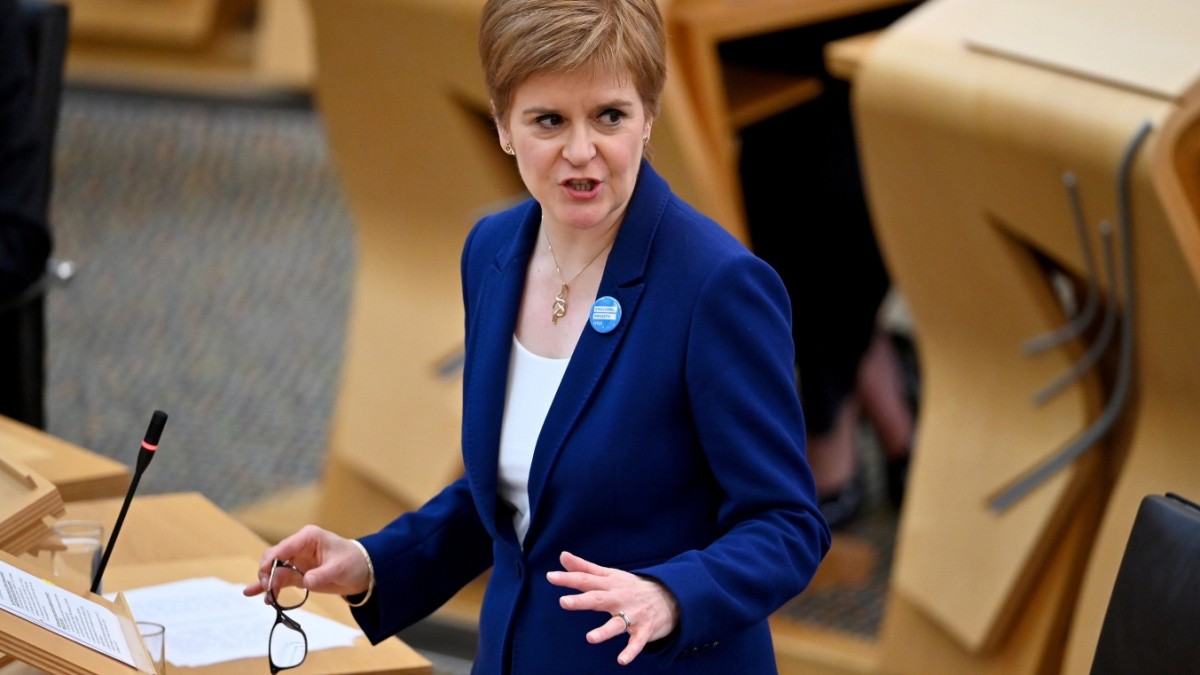 Most Scots are certainly not going to be offended if you claim they are facing a cultural break. From this weekend on, pubs will no longer be allowed to serve alcohol. No ale, no lager, no whiskey, nothing. The ban initially applies for 16 days. In the regions worst hit by the coronavirus, restaurants will even have to close completely. For those Scots who think they are part of their country’s legendary pub culture, this is a decree that hurts a lot.

Responsible for this is Nicola Sturgeon, 50 years old, chairman of the Scottish National Party (SNP) and head of government in Scotland since 2014. When First Minister With her Corona policy, she not only has the welfare of the country in mind, but also a clear political goal: She wants to act faster and more decisively than Boris Johnson, who is responsible for the Corona rules in England.

Since the outbreak of the pandemic, she has been skilfully driving the prime minister in front of her. Sturgeon made decisions that Johnson could only imitate. It looks like he will also be imposing pub closings in the coming week – at least in those parts of northern England where the number of infections has risen dramatically. That might suit Sturgeon. Once again, she would be the one dictating the course to the hesitant prime minister.

Compared to Johnson, Nicola Sturgeon’s popularity in the Corona crisis has not suffered as much by far. This is also due to the fact that her political style is pretty much the opposite of Johnson’s demeanor: In the government district of Edinburgh, she is considered a detail-obsessed technocrat who really only gets off her skin when it comes to fighting for Scotland’s independence.

Sturgeon wants to propose a new referendum bill before the Scottish general election in May. She also wants to put Johnson under pressure with this. The prime minister is strictly against Scotland leaving the United Kingdom. On the one hand, Sturgeon’s move is symbolic politics because the question of whether Scotland can hold such a referendum would have to be decided by the British Parliament. On the other hand, Johnson cannot dismiss the maneuver as an absurd dream. Because the higher the presumed election victory of Sturgeon’s SNP, the harder it could put Johnson under pressure to allow a referendum.

In 2014, the Scots had voted 55 to 45 percent to remain in the UK. But now, according to surveys, a majority is in favor of leaving. The main reason for the split-off request is Brexit, which Sturgeon calls “irresponsible”. So she knows the majority of the Scots behind her. She likes to present herself as a friend of the EU. During a visit to Brussels in February, she said she was looking forward to the day when an independent Scotland would join the EU.

Sturgeon joined the SNP at the age of 16 to stop Margaret Thatcher’s conservative policies. She is married to the party’s long-time director, Peter Murrell, and describes herself as a feminist and pacifist. Recently, however, Sturgeon’s image as a fighter got scratched. She is accused of having misled the Scottish Parliament. It’s about when she found out about the allegations against her predecessor Alex Salmond, who was charged with sexual harassment and eventually acquitted. This week, she said on record that she had known about it earlier than claimed – she had “forgotten” a meeting with Salmond.

Since then, the opposition in Edinburgh has been reproaching her that Johnson often hears: that she does not seem to take the truth very seriously.