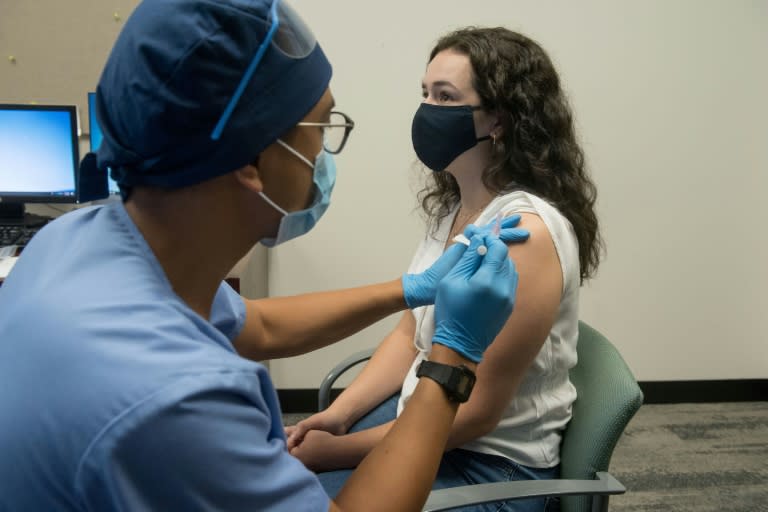 Two American companies hope to apply for emergency approval for their COVID-19 vaccines by the end of November, good news for the United States at a time when it is experiencing a new spike in cases, totaling more than eight million.

Pfizer said Friday that it hopes to take a step forward with its vaccine after safety data becomes available in the third week of November, a couple of weeks after the November 3 presidential election.

The announcement means that the United States could have two vaccines ready by the end of the year, with the addition of one from the Massachusetts biotechnology firm Moderna, which is targeting November 25 to request authorization.

“Assuming positive data, Pfizer will apply for the use of emergency authorization in the United States shortly after the safety milestone is achieved in the third week of November,” the company’s president and CEO, Albert Bourla, said in a letter. open.

The news had an impact on the company’s shares, which rose 2% in the United States after the announcement.

But experts warn that even when vaccines are approved, it will take several months for them to become widely available.

In any case, they are unlikely to be a good substitute for wearing masks, social distancing, and other recommended behaviors to curb transmission, as how effective they will be is unknown at this time.

“We may not be able to see packed cinemas or stadiums full of spectators again for many months to 2021, or even later,” explained the director of the American Institute of Infectious Diseases, Anthony Fauci, this Friday during an interview with Johns University. Hopkins.

The government, however, is already preparing the immense logistics chain that will be necessary to launch the distribution of the first doses in the 24 hours that follow any authorization.

This Friday, those responsible for the government operation “Warp Speed” announced a collaboration with the large pharmacy networks CVS and Walgreens to administer vaccines in the 50,000 nursing homes in the country.

After the fall in infections during the summer, the country reached a tipping point in its coronavirus outbreak around the second week of September, with a new average daily cases of more than 50,000, according to the latest figures, and the trajectory is ascending.

With more than eight million confirmed infections and over 217,000 deaths, the United States is the most affected country in the world.

Current numbers indicate that the country has never been this close to returning to the levels of its first wave in the spring, so the peak of these days can be considered a third increase.

Geographically, the main points of infection are in the Midwest area to the north, and in parts of the West, while some regions of the Northeast hard hit in spring are experiencing outbreaks.

Harvard surgeon and health policy researcher Thomas Tsai told AFP that there are multiple factors behind the increase in cases, from insufficient evidence in the Midwest to a lack of monitoring and backtracking by authorities on reopening. .

In addition, “from contact tracing reports from various municipalities and states, the concern is that the spread is now being driven by social gatherings inside people’s homes,” he added. The advance of the cold in the boreal autumn takes more and more the social life to closed spaces.

One positive sign is that COVID-19 treatments have improved remarkably, and since cases are more scattered, hospitals are not collapsed.

Pfizer and Moderna, both funded by the US government, launched the third phase of their clinical trials in late July, and both are producing their doses simultaneously. His goal is to deliver tens of millions before the end of the year in the United States.

Both are “mRNA vaccines,” a new experimental platform that has never been fully approved before. The experiments consist of injections with the genetic material necessary to develop the SARS-CoV-2 “spike protein” within people’s own cells, thus eliciting an immune response that the body will remember when it encounters the real virus.

This effectively turns the body into a vaccine factory, avoiding the costly and difficult processes that more traditional production requires.

But while the approach may have helped put Pfizer and Moderna first in the race, a major drawback is that they require freezers for storage, which could limit distribution.

Ten experimental vaccines are in the final phase of trials around the world, but these are the only two currently active in the United States.