VAR risks turning players and fans into “robots,” says the head of the Wolves 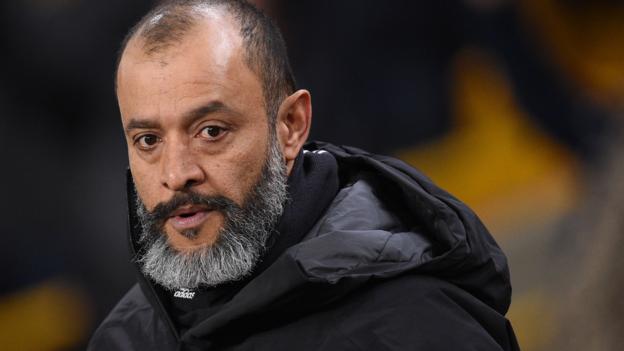 The French defender’s header was ruled out because Pedro Neto’s heel was slightly offside in the accumulation.

“Let those who understand do something to have the joy of celebrating,” said Nuno.

“Something has to be done.”

The wolves have conceded four goals excluded by VAR this season.

It was also their second goal canceled by the VAR against Leicester this term after Leander Dendoncker’s effort was scored 0-0 on the opening day of the season.

The decision not to approve the goal on Friday evening lasted over a minute and sparked the anger of the Wolf supporters.

And their mood was not helped by seeing a fixed image of the accident, which seemed inconclusive to those inside the ground.

“The law is the law, but the question is: is there a clear advantage?” added Nuno.

“Obviously I’m angry because Molineux was buzzing and suddenly he fell.

“It is difficult for players to sustain concentration levels in this situation and it is even worse when they see the picture.

“Let’s try to hope that those who have had to decide can take a good look and see what’s going on.

“The players don’t understand. They don’t see, they don’t have the lines. When you have something and someone takes it away you don’t like it. You can be on both sides, but unfortunately it happens several times for us.”

If Boly’s goal had been up, it would have been the first time Wolves opened the scoring in a Premier League game since their 2-2 draw in Brighton on December 8th.

Wolf captain Conor Coady previously stated that VAR “doesn’t work” and is “confusing” to the players.

And it was no surprise to see him rushing to referee Mike Dean while the half-time whistle blew.

Coady seemed to ask the official, “Who is offside, Jota? From a corner?” before leaving after receiving no response, saying “You are the arbiter and you also don’t know.”

Talking to BT Sport after the game, his sense of frustration was evident: “I have already spoken before, it doesn’t really get you anywhere.

“I said before, we should have won the game, I don’t understand the decision and I don’t think anyone else will.”

‘This isn’t football’ – your reactions on #bbcfootball

Dave Payn: If that goal had been scored in Germany, Italy or the Champions League, it would have been valid. VAR is not the problem, common sense or lack of it, it is.

Mike Magners: I thought the offside rule was “interfere with the game”, how come someone who is a fraction of an offside for a minute, at the side of the field “interferes with the game” ???

Garett T Switzer: This is not football. Is that system calibrated? If you showed 100 neutral fans playing and wondered if he was offside, even in slow motion, nobody would call him offside.

Chris Pybus: It is offside but does not kill the atmosphere in half. There should be a half-foot allowance for decisions that aren’t made in accumulation and made in hindsight. Obviously the last man should remain rigid if taken.

David Howell: This is Attachment A of the case against VAR. And I speak like someone who basically likes you.

Paul: They are a neutral but absolute joke that the wolf target has been rejected. Absolutely pathetic. If it was offside it was only off by millimeters. Such decisions are ruining football

Tommy-T-Rex: Don’t worry about financial expenses and doping. The fact that the heel is half a centimeter per side is what lawmakers really care about.