War in Syria: the government will pay a “heavy price” to attack Turkish troops 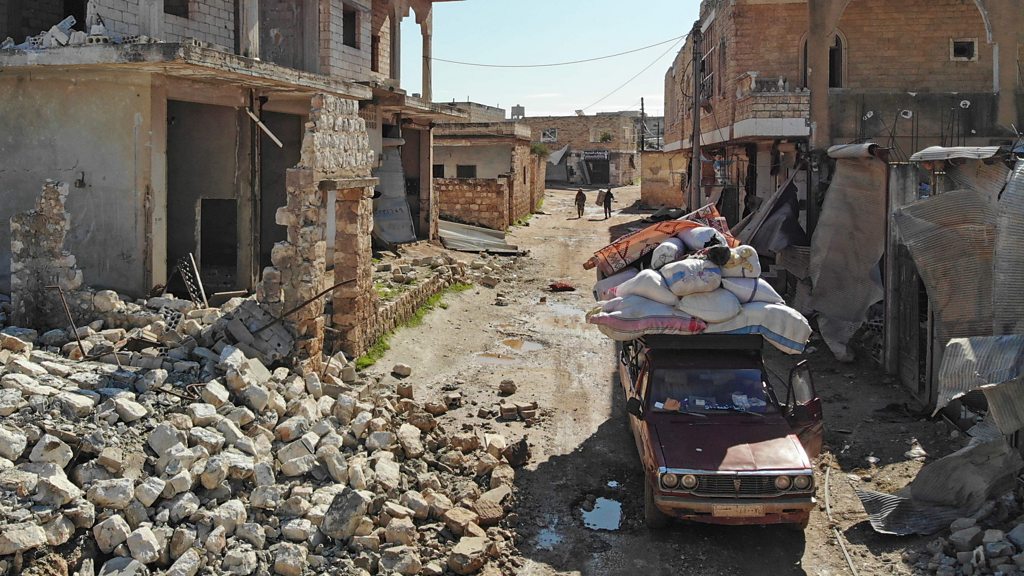 The President of Turkey has warned the Syrian government that “it will pay a very, very heavy price” for attacks on Turkish soldiers in northwestern Syria.

Five troops were killed on Monday in the opposition-held Idlib province, while the Syrian army continued an offensive.

The Syrian Observatory for Human Rights (SOHR), a UK-based monitoring group, reported Tuesday morning that they had chased rebel fighters and jihadists from the last section of the M5 they were keeping west of Aleppo city.

However, there were no confirmations from the military or state media, and clashes are reportedly going on along parts of the highway on Tuesday afternoon.

The government has not controlled the entire M5 highway, which connects Aleppo with the capital Damascus and the border with Jordan, since 2012.

Also on Tuesday, a government helicopter was reportedly shot down near the opposition-held town of Nayrab, southeast of the city of Idlib, killing its crew. The videos seemed to show the helicopter on fire before it crashed.

And 12 civilians, six of them children, were killed and 30 injured in airstrikes in the Sinaa and Jalaa areas of the city of Idlib, according to SOHR.

Opposition supporter Turkey has sent troops to Idlib by virtue of agreements with Syrian government allies Russia and Iran – the Astana 2017 and Sochi 2018 agreements – which have sought to reduce hostilities.

So far this month, the Syrian army’s artillery fire has killed 12 Turkish soldiers and a civilian contractor.

The Turkish defense ministry said Turkish forces responded to Monday’s attack by hitting 115 targets of the Syrian government and “neutralizing” 101 soldiers. However, the Syrian army reported no casualties.

In a speech in Ankara on Tuesday, President Erdogan said: “We gave the Syrian side the necessary answers at the highest levels. Especially in Idlib, they got what they deserved. But that’s not enough. It will continue.”

“The more they attack our soldiers, the heavier the price they will pay. Tomorrow we will share these steps with the public,” he added.

The Turkish state news agency reported that a new convoy of military vehicles and commandos had been sent to Idlib to strengthen Turkish positions there, adding to the hundreds of tanks and thousands of soldiers that would have been deployed last week.

The Syrian army later said that Turkey “is stepping up its acts of aggression by targeting populated areas to help terrorists” and that it would react to the attacks.

Meanwhile, Russia has asked for de-escalation agreements to be implemented and warned it deemed “any terrorist activity directed against the Syrian armed forces and Russian military structures” unacceptable.

The Syrian army said that its soldiers, who were supported by Iranian-backed militiamen and Russian airstrikes, regained more than 600 square km (231 square miles) of territory and “liberated” dozens of towns and villages in the last days.

At least 373 civilians have been killed and another 689,000 have fled their homes since the offensive began in December, according to the United Nations.

“This is, from our initial analysis, the largest number of displaced people in a single period since the beginning of the Syrian crisis, almost nine years ago,” said a spokesman for the United Nations Office for the Coordination of Humanitarian Affairs.

More and more displaced people on the move in northwestern Syria. Freezing conditions, with ice on the ground, as shown in this photo from this morning. These people fled southern Idleb to Hazano a month ago. Now they are moving again after the nearby bombing. Desperate situation … pic.twitter.com/Yu9ULmPABP

The vast majority of displaced people are moving north and west to areas near the Turkish border which are already overcrowded and where there is a shortage of adequate housing. Many were forced to camp on agricultural land without infrastructure in harsh winter conditions.

Doctors Without Borders warned that a significant number of hospitals have been affected and partially or completely destroyed in the past few months, which means that the injured have also had difficulty accessing healthcare facilities.