After the intense rains that were registered in Pinamar and that caused great flooding in the area, yesterday the last cars that had been trapped in the middle of the water were rescued, mainly those that were in the hotel parking lot that suffered building damage due to the storm.

As reported by the municipality, the Urban Services worked in different parts of the city with the support of staff from Firemen, of Transit and of the Urban Guard, in addition to some neighbors who came to collaborate in the tasks.

Throughout the day, loaders and motor graders toured the affected regions to reopen the streets that had been closed and finish removing the cars that were still in the place.

“Yesterday we worked until late and today from early after the flood we had. Our urban services team is already removing the vehicles that were left in the parking lot that was flooded, after having drained it “, explained the local mayor, Martin Yeza, who shared images of the operation.

Between Thursday and Friday, a severe storm was registered in Pinamar that flooded several intersections and left several cars floating in its streets. In just three hours 200 millimeters of water fell, undermining the concrete of some streets, a fact that generated floods and landslides.

As a consequence of the storm, several vehicles were covered by waterwhile some people had to get on rowing boats to be able to move from one place to another in the heart of the city, as could be seen in some photos that began to be shared immediately on social networks. Also, in the wake of the floods part of the structure of a hotel parking lot collapsed.

Faced with this situation, the Municipality asked residents and tourists to refrain from traveling on public roads, because at that time it was difficult to see under the water and there could be “wells”, which “is very dangerous” , as explained Diego Diez, coordinator of Civil Defense of the party.

In the early hours of Saturday the National Meteorological Service (SMN) raised the alert from yellow to orange due to rains and storms which took place in various parts of the province of Buenos Aires, mainly in the busiest spas. 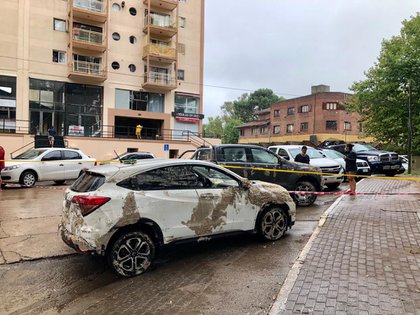 This is how the cars were after the storm

In addition to Pinamar, the parties of Necochea, Villa Gesell, La Costa and Mar del Plata, that presented an unstable climate throughout the week, with cloudy skies, accompanied by showers and isolated and intense storms, with temperatures that were around 22 degrees, as reported by the SMN.

On one of the busiest tourist weekends of the year, the Atlantic Coast of Buenos Aires will be one of the sectors of the country most affected by the instability of its climate during these days. To a lesser or greater extent, the rains will remain between moderate and heavy and will last until next Tuesday. On the other hand, the temperature in these destinations will not exceed 23 degrees maximum.

READ  Out with a bang? FTSE 100 will increase after Boris Johnson's Brexit deal - EzAnime.net

On Sunday there will be mainly rains and showers throughout the day. Monday will arrive with the same background scenario, although the SMN indicated that only on Tuesday could there be some relief but with mostly cloudy skies and a maximum temperature of 22 degrees. On Wednesday and Thursday, meanwhile, they will again have the presence of the sun with slightly cloudy skies and more pleasant thermal marks.

After an explosion, two Argentines who were transporting medicinal oxygen on a route in Bolivia died

Love in times of pandemic: stories of couples who met in isolation