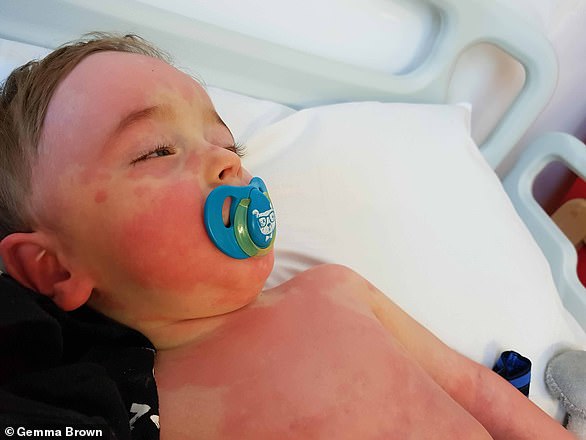 A study of eight children hospitalized in a Birmingham hospital with the condition reveals that they were infected with the SARS-CoV-2 virus several weeks before showing symptoms.

All children tested negative in the traditional laboratory test used to diagnose COVID-19 in adults.

However, a tailored antibody test revealed that the young patients had been infected with the coronavirus and produced antibodies to fight the pathogen.

Doctors who treated the children say that antibody tests are the only way to accurately identify the presence of the virus in children suffering from the hyperinflammatory condition, which can be fatal.

It is not known why the syndrome develops weeks after infection, but scientists believe it may be due to a severe overreaction from the body’s immune system.

This “immune-mediated disease” causes the immune system to go haywire and cause damage to the body’s cells.

A similar phenomenon has been observed in adults and can be fatal for the sickest patients.

The syndrome that affects children has been provisionally called PIMS-TS, for “pediatric multisystem inflammatory syndrome temporally associated with SARS-CoV-2”.

However, British scientists say that the definition of the condition is incorrect as it is not “temporally associated” with the pandemic but is instead “triggered by the SARS-CoV-2 infection”.

A team of scientists led by dr. Alex Richter and Professor Adam Cunningham of the University of Birmingham studied eight young patients who were hospitalized between April 28 and May 8.

Laboratory tests, used to identify COVID-19 and also to select healthcare professionals, were negative for all eight individuals.

These tests, called PCR tests, are extremely reliable and are “the closest to a gold standard for determining active infection.”

Professor Adam Cunningham, who led the research together with dr. Alex Richter and Dr. Barney Scholefield, told MailOnline: “PCR detects the presence of the virus itself, so the virus must be present at the site in the throat where the sample (usually a throat swab is taken).

‘If you clear the infection, there will be no viruses to detect.

“In response to infections, we often produce antibodies, which are usually detectable 14 days after the first infection.

“These antibody responses often persist in the body for months and often many years later.”

The average age of hospitalized children was nine years and five of the patients were male. 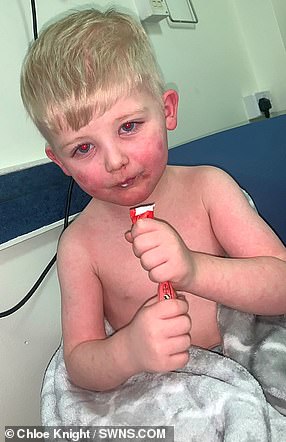 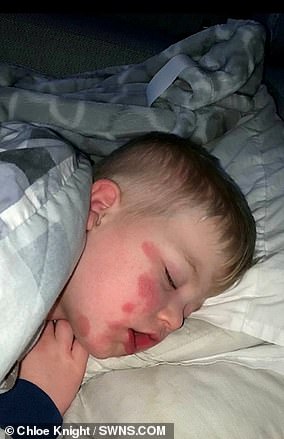 Chloe Knight, 22, revealed that her two-year-old son, Freddie Merrylees (pictured), got sick shortly before the blockade and was “like a zombie” due to Kawasaki disease. The young man had a rash on his body, a high fever, red eyes and struggled to eat and drink

Seven of the patients showed symptoms of hyperinflammation and Kawasaki disease.

One of the patients was experiencing symptoms of hyperinflammation and some signs of toxic shock syndrome.

The mysterious and dangerous condition is described by the best medical professionals as very rare and symptoms can include fever, abdominal pain, rash and red lips and eyes.

A very small group is in shock, in which the heart is affected and they can have cold hands and feet and breathe quickly.

Of the eight children treated in Birmingham and studied as part of this historical research, all patients had fever and at least one gastrointestinal symptom such as abdominal pain, vomiting and diarrhea.

Six of the patients required hospitalization in pediatric ICU due to heart problems and low blood pressure caused by the disease.

All showed positive signs after treatment and have since been discharged from intensive care.

Due to media reports and statements by leading prominent advisers and politicians that this condition could be linked to the coronavirus pandemic, the researchers took blood samples for analysis from all eight children.

They then developed a customized antibody test with the help of researchers from the University of Southampton.

The test involves making an artificial copy of a key protein on the coronavirus surface that looks like a spike.

This unique “spike” is a key identifier of the killer virus and was first revealed in detail by Professor Max Crispin of the University of Southampton.

He modeled the protein surface peaks and this allowed his team to produce an almost exact copy of the peak.

In Birmingham hospital, this artificially created version of the protein spike was mixed with patient blood samples.

The researchers saw that some antibodies in the children’s blood bound to the spike, just as they would if the virus itself was invading.

In tests, the researchers tried to see which of the three different immunoglobulins (the technical name for an antibody) – IgG, IgA and IgM – stuck on the imitation virus.

A positive IgM reading in the tests indicates a recent infection while a positive IgG and IgA reading shows an older infection, say the scientists.

The children of Birmingham hospital had no IgM antibodies but had IgG and IgA antibodies, showing that they had been infected with SARS-CoV-2 several weeks earlier.

This delay is why the PCR test did not detect the infection, say the researchers.

“IgM was not detected in children, which contrasts with adult hospitalized COVID-19 adult patients, all of whom had positive IgM responses,” the researchers write in the study, which was submitted to a prepress server. and seen by MailOnline.

‘Therefore, high IgG levels in the absence of IgM are typically indicative of infection weeks or even months earlier. ‘

This antibody test is conducted in the laboratory and is not a portable test. It is also fundamentally different from the government-approved test today, which is manufactured by Roche.

Roche’s method uses a nucleoprotein to mimic the SARS-CoV-2 virus, not the viral peak.

“The use of the native viral peak for antibody tests is demonstrating a very sensitive way of detecting exposure to SARS-CoV-2,” Professor Crispin told MailOnline.

The researchers say their research shows that the only way to diagnose patients with severe inflammatory syndrome symptoms who have tested negative for PCR is through antibody tests.

‘This may mean that the disease developed after the children had already eliminated the virus.

If so, serology may be more diagnostically useful for children with negative PCR.

“What the antibody test tells us is that these children have definitely been infected with SARS-CoV-2 at some point in the past, which will hopefully help doctors make decisions about how to treat these patients.

Ultimately, both PCR and antibody tests have overlapping roles to play in diagnosing this syndrome. Really exciting, antibody detection can also provide clues to how this syndrome develops. “

As a result of their findings, the researchers suggest changing the definition of PIMS-TS, as the Kawasaki-like condition is now known.

“Since all patients were serologically positive, it may be worth considering changing the definition of PIMS-TS so that TS is not only” temporally associated with the SARS-CoV-2 pandemic “, but” triggered by the infection of SARS-CoV-2 “,” conclude the researchers in their study.